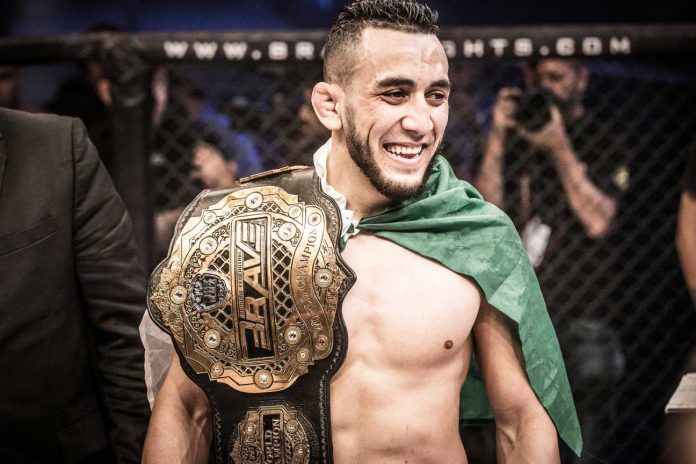 Brave announces championship title defence to be held in Bahrain

September 24, 2017
Facebook
Twitter
Pinterest
WhatsApp
Linkedin
Bahrain will be the venue for the first ever championship title defence match from Brave Combat Federation. Lucas Martins from Brazil will face Elias Boudegzdame from Algeria for the championship title match at Khalifa Sports City on November 17. Elias is the first featherweight champion in Brave. His achievement had been applauded by Ministry of Sports in Algeria.
The fight story of Elias had been featured in the first film launched by the Bahrain based production house, Brave Films and was televised in France and Algeria.
With an impressive 19-3 professional record, Lucas became a familiar name to the MMA community after fighting seven times in UFC, while bagging four wins. The title fight between the champion Boudegzdame and challenger Martins will take place at Brave 9: The Kingdom of Champions on 17 November. Brave 9 will be the culmination of the International Combat Week, alongside the IMMAF World Championships, under the patronage of Sheikh Nasser bin Hamad Al Khalifa.
Facebook
Twitter
Pinterest
WhatsApp
Linkedin
Previous articlePath Forward for Environmentally Sustainable Motoring
Next articleKingdom of Saudi Arabia’s National Day Celebrated