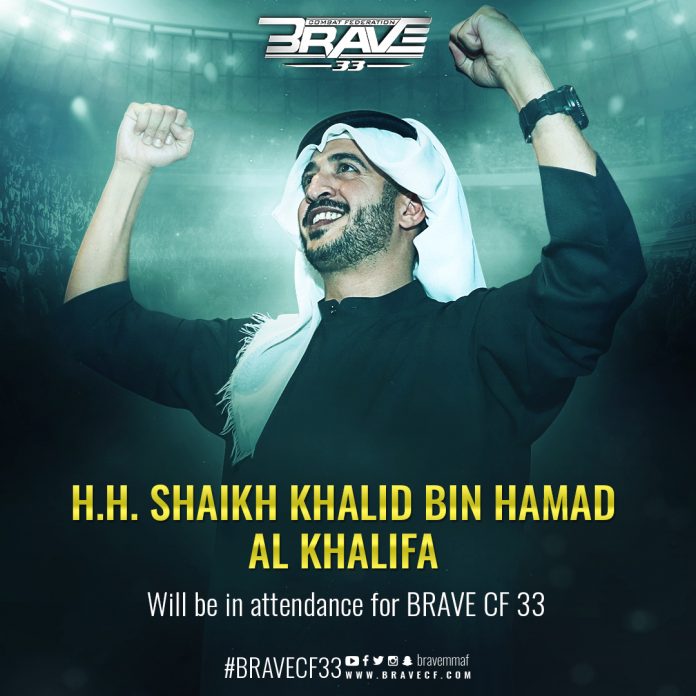 The visionary of BRAVE Combat Federation, the fastest-growing MMA promotion in the world, will be on-site to witness a truly global fight card, as BRAVE CF returns to Saudi Arabia. On December 27th, in Jeddah, His Highness Shaikh Khaled bin Hamad Al Khalifa will be in attendance for BRAVE CF 33, the end-of-the-year extravaganza of the Bahraini-based organization.

In Jeddah, Shaikh Khaled will witness 12 incredible bouts, that highlight the global reach of BRAVE Combat Federation, as athletes from 15 countries and six different regions descend upon the Kingdom of Saudi Arabia. His Highness will be keen to see the development of some of the best fighters in the world as they look to defend their flags at the highest level.

Shaikh Khaled established BRAVE Combat Federation in late 2016 with the view of globalizing the sport of mixed martial arts, by taking it to all corners of the world, as well as providing athletes from all over the globe with a truly international platform to showcase their talents, regardless of their backgrounds and marketability.

This effort has led BRAVE CF to become the fastest-growing MMA promotion on the globe, as the organization has traveled to 18 countries in five continents so far, mixing well-known MMA markets such as Brazil and England, with nations that had never witnessed international MMA action before, such as India, Indonesia, Colombia, Pakistan, and Jordan.

BRAVE CF 33 marks the second time BRAVE Combat Federation lands in Saudi Arabia, as two of the best Middleweights on the promotion’s roster will collide in the main event, as Russia’s Ikram Aliskerov takes on Sweden’s Diego Gonzalez. Former title challenger Felipe Efrain is also on the card as he meets Jeremy Pacatiw in a Bantamweight bout. Also set for BRAVE CF 33 is the return of top striker Cian Cowley, who looks to get back to the win column, against England’s Sam Patterson.

The Central Bank of Bahrain (CBB) called on consumers to be cautious and vigilant when dealing with their personal and banking information. This warning came...
iGA