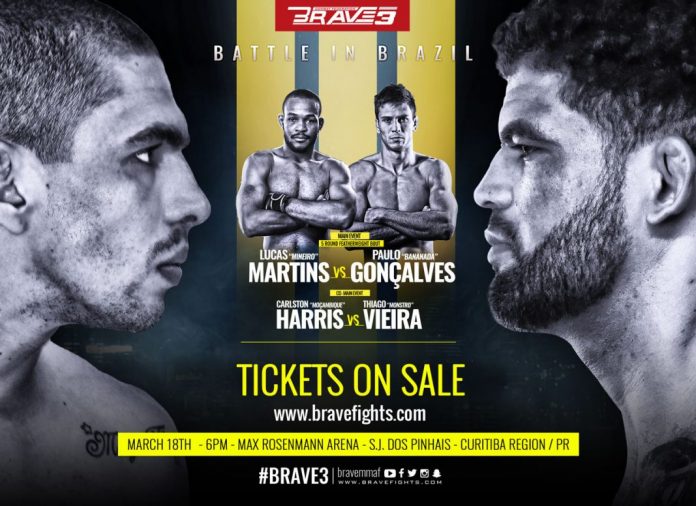 Brave 3: Battle in Brazil, the first ever international installment of Middle East’s number one promotion Brave Combat Federation, is going full throttle. This Tuesday (21), the promotion announced the ticket sale for the card in Curitiba along with the venue that will host the fight night.

The Max Rosenmann Arena, in São José dos Pinhais, Curitiba Metropolitan Area, was the chosen place for the Brazilian debut. The modern sports complex, located less than 15 km away from Curitiba’s downtown, is a facility used to host combat events, being the home of Brazil’s Immortal FC.

For the ticket sale, Brave opted for a fan-oriented strategy and focused in offering an international-level structure and fight card with tickets at affordable prices. The decision, according to Brave’s CEO Mohammed Shahid, was taken considering Brazil’s economic situation and the size of the country, which can lead to long trips by the fans.

Mohammed Shahid:  Hello Brave Nation, finally the wait is over, Brave 3: Battle In Brazil are going to be available tomorrow on BraveFights.com. We have a stacked fight card, with a huge main event, I am sure it’s going to be a historic night. But the best news is going to be the price of the tickets, we sat down, we thought a lot and we reached a conclusion that the prices of the tickets are not going to be imperative and we want to make sure that every single fan comes out there and witness why Brave Combat Federation is one of the fast growing international MMA promotions. So guys, go to BraveFights.com grab your tickets and am going to see you there on March 18 in Curitiba.

Brave 3: Battle in Brazil will be headlined by the long-awaited clash between the rivals Lucas “Mineiro” Martins and Paulo “Bananada” Gonçalves. In the co-main event of the evening, Thiago “Monstro” Vieira will face the newcomer Carlston “Moçambique” Harris.

This will be Brave Combat Federation’s first international installment after back to back events in the Kingdom of Bahrain. In 2016, the promotion was born under the patronage of His Highness Shaikh Khalid Bin Hamad (KHK MMA) making a huge impact and a cultural shift in the country. A Middle Eastern based global brand, Brave has proved in a short period of time to effectiveness and seriousness of the project. Brazil is the first international stop, yet 2017 will witness a regional invasion and international presence in many more countries.

Southern Governor His Highness Shaikh Khalifa bin Ali bin Khalifa Al Khalifa met  through his virtual Majlis with a number of citizens from the...
Read more
Wheels and Gears

Y.K. Almoayyed & Sons, the sole distributor of Renault vehicles in the Kingdom of Bahrain hosted a special delivery ceremony in Bahrain to hand...
Management Principles

The Artificial Intelligence (AI) Academy of the Bahrain Technical College (Bahrain Polytechnic) launched the first batch of 38 students. This came under the directives of...
Tech