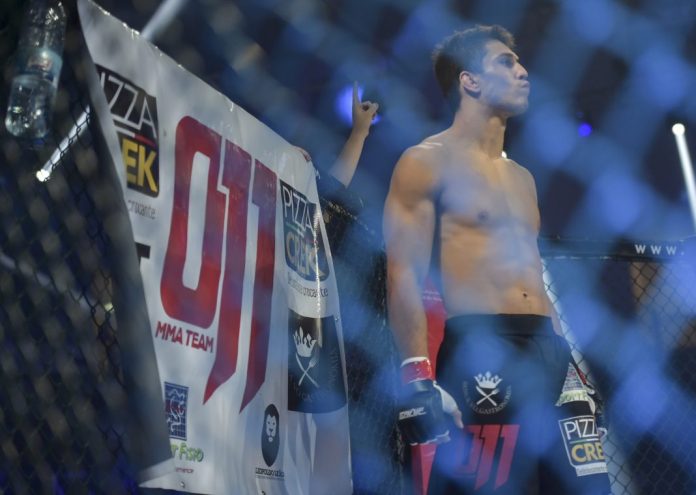 Brave Combat Federation welterweight Thiago Vieira is looking for redemption as he returns to the cage in his home country, Brazil. He is set to face Carlston Harris at Brave 3: Battle in Brazil co-main event, on March 18th, in Curitiba. The event will be headlined by a much anticipated 5X5 non-title featherweight bout pitting Lucas “Mineiro” Martins (16-3) against Paulo “Bananada“ Goncalves (21-11).

Vieira (8-1 MMA, 0-1 Brave) has built a reputation of fists in the MMA world. With all his wins by way of knockout or submission, the 001 MMA jewel is looked at as natural born finisher.

In an unexpected happening, and against all odds, Thiago suffered his first defeat as a professional in a big upset at Brave 1 “The Beginning”, being knocked out by the late replacement Gadzhimusa Gaziev.  Vieira has put this loss behind him and cleared his mind out of any negativity surrounding that glitch. His focus is not 1000% on Curitiba and that’s what fighters are made of.

In an interview done by Hari of KHK MMA, Thiago shared his latest thoughts and plans regarding the upcoming battle at Brave 3: Battle in Brazil.

“My mind is clear and there are absolutely no thoughts or emotions each time I step into the cage. When the bell rings. I have to destroy what is in front of me. This had always been my game plan and this time I have more reasons to be intense and it matters. “

Representing one’s country is a big deal for any athlete but as Vieira stated, in Brazil, and given the living situation, everyone is emotionally dangled when it comes to fighters representing the flag. If you are Brazilian and competing in a sport, you feel like a whole nation is behind you.

“It is always wonderful to compete in my country. I love to fight in other countries, travel, discover the world and explore different cultures. But when you are fighting in Brazil, you are backed by the emotions of every single Brazilian cheering for you to deliver the best. We athletes had always been the inspiration this country had relied on at tough times. And I will proudly spill blood for the glory of my nation! “

With such a big weight on his back Vieira has upped his training to “MONSTER” level according to his teammates at 001 MMA Team in Sao Paulo. As the fight gets closer, Thiago plans to take his training camp to California. Previously spotted at Alliance MMA, California, Thiago will join great athletes like Phil Daves, Jimmy Harbison, Paul Bradley, Dominick Cruz as he fine tunes his weapons and get ready for March 18!

Microsoft is about to release a big Xbox app update for iOS that includes the ability to stream Xbox One games to an iPhone....
iGA