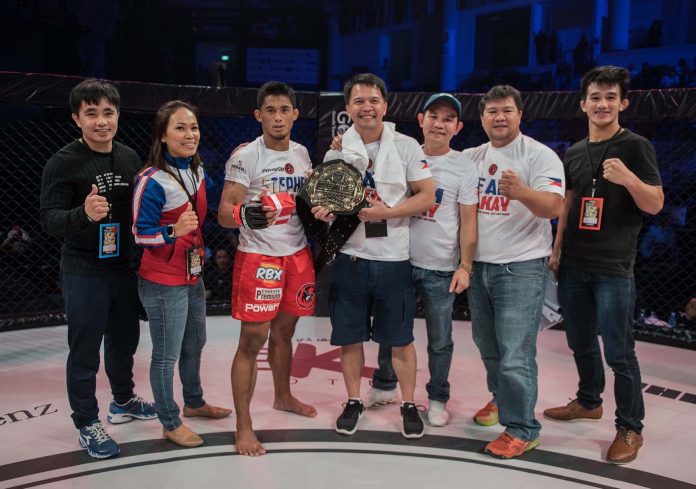 January 17, 2018
Facebook
Twitter
Google+
Pinterest
WhatsApp
Brave Combat Federation World Bantamweight Champion, Stephen Loman and Team Lakay head coach, Mark Sangiao are among the winners for this year’s Kafagway Sports International Luminaries Awards in Philippines. Loman will receive the Super Athlete of 2017 of the sports awards, spearheaded by National Correspondents Club on February 10 at the Silungan Center, Philippines.
Stephen Loman won the inaugural World Bantamweight championship at the Khalifa Sports City in Bahrain against Gurdarshan Mangat by way of knockout in the first round. Mark Sangiao will receive the Super Coach of 2017 award. Sangiao was recently named one of the most outstanding coaches in Asia and was responsible for the rise of Team Lakay on the global stage.
Brave Combat Federation has provided a global platform for athletes from Philippines to showcase their skills which also brought the two nations closer using the medium of sports. After the Brave International Combat Week, the sports initiatives led by Bahrain had been praised by H.E. Ambassador Alfonso A. Ver, the Ambassador of Philippines in Bahrain while he welcomed Stephen Loman after his championship victory.
Facebook
Twitter
Google+
Pinterest
WhatsApp
Previous articleAlba CEO kicks-off 2018 Town Hall Meetings
Next article“Hut Hut” – Andrés Iniesta Tackles New Role In UFX Commercial

Google is “previewing” a new feature here at CES for the Google Assistant on Android phones that turns it into a supercharged screen reader....
Read more
Yoga

In line with the directives of HM King Hamad bin Isa bin Salman Al Khalifa to the government to undertake the development of a...
Inside Bahrain

Lenovo hasn’t made the best bets in virtual reality so far. It seems like the company’s about to try again — according to a...
Uncategorized

Gulf Air - the Kingdom of Bahrain’s national carrier – in line with its boutique strategy to add boutique leisure destinations to its network,...
Management Principles