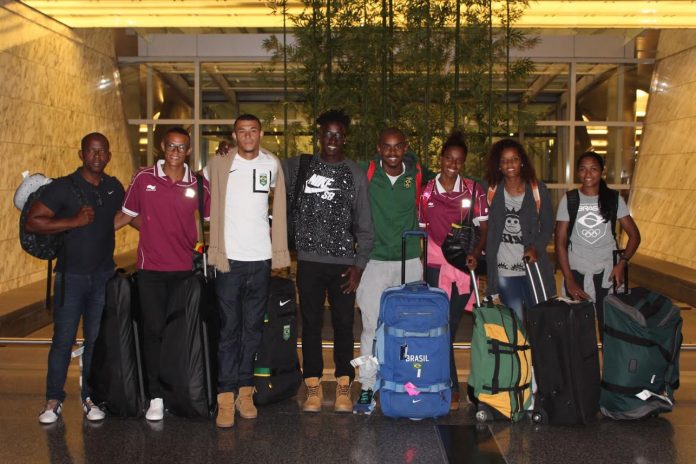 Athletes from the Qatar Olympic Committee’s (QOC) Shine project have arrived in Doha ahead of a world-class athletics training camp at the globally-renowned Aspire Academy. The talented young athletes from disadvantaged backgrounds in Rio de Janeiro will spend a week receiving specialised coaching and sport science testing to support their journeys towards becoming Brazil’s future Olympic Champions.

“It is a pleasure to welcome our Shine athletes to Doha for their training camp and we look forward to sharing with them our culture, warm hospitality and passion for sport. The QOC believes in the power of sport to transform lives and we are committed to spreading the Olympic spirit far and wide, and touching the lives of people from around the world. We were determined to grasp the opportunity of the Rio 2016 Games to deliver a true, meaningful legacy for Brazil’s young athletes.

“Through Shine, we aim to utilise our resources and commitment to the global development of sport by providing support and assistance for the young athletes’ future sporting careers. These athletes come from disadvantaged backgrounds in Brazil and the majority of them have never been overseas before. We hope that their experience at the Aspire Academy training camp will equip them with knowledge, expertise and cultural experiences that will enhance their future sporting and social development.”

The Shine project is a partnership between the QOC, Aspire Academy, Qatar Athletics Federation, Rio de Janeiro Athletics Federation and Futuro Olimpico, an NGO founded by Brazilian Olympic bronze medallist, Arnaldo de Oliveira. Last May, almost 200 of the most talented young athletes in Rio de Janeiro competed in an athletics competition to win one of 10 places to travel to Qatar for the Aspire Academy athletics training camp.

Qatar Airways provided complimentary tickets for the Shine athletes to travel to Doha through their sponsorship of the QOC and Team Qatar at the Rio 2016 Olympic Games. Over the next week, the athletes will follow similar tailored and optimised athletics training programmes to those of the Aspire Academy students, with input from the world’s best coaches and sport scientists. Notable athletics graduates of the Aspire Academy who have participated in these programmes include Qatar’s first-ever Olympic silver medallist Mutaz Barshim and double World Junior Champion in the hammer throw, Ashraf Elseify.

In addition to the training camp, the QOC provided a further legacy from Rio 2016 through Bayt Qatar, the QOC’s Rio 2016 Olympic hospitality house, by donating all proceeds from public entry fees to Futuro Olimpico. The donations will enable the NGO to buy uniforms and equipment for the athletes and for further athletes to benefit from the partnership.

Speaking about the Shine project, Futuro Olimpico founder and coach, Arnaldo de Oliveira, who has travelled to Doha with the Shine athletes, said:

“I founded Futuro Olimpico in 2007 with the goal of using athletics as a tool for social inclusion and transforming athletes into great citizens. We are so excited to be here in Doha and to experience the high level training facilities and sporting infrastructure. It is a unique experience for our athletes to meet new athletes and experience a new culture and we are so grateful for this opportunity.”

The Shine training camp will take place until 25th February and will combine high level training sessions with cultural visits. The highlights and progress from the trip will be documented on the QOC’s social media channels under the hashtag #YallaQatar.