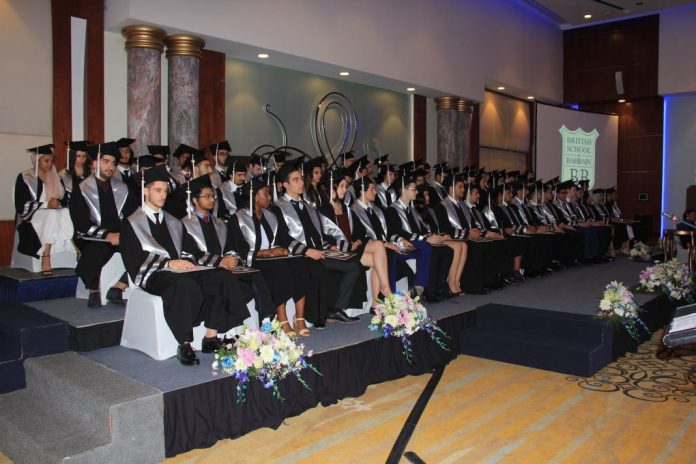 The British School of Bahrain commemorated the graduation of its class of 2017 in a ceremony held under the patronage of His Excellency Shaikh Ahmed Bin Khalifa Al-Khalifa, Chairman of GFH Financial Group, owners of the British School.

Gathering at The Diplomat Radisson BLU Hotel, some 70 students from years 12 and 13 received their certificate of graduation from His Excellency Shaikh Ahmed Bin Khalifa Al-Khalifa and were addressed by notable members of the School’s faculty, trustees and guests. This included His Excellency Mr. Bernard Regnauld-Fabre, Ambassador of France to the Kingdom of Bahrain; Mr. Hisham Alrayes, CEO of GFH and member of Board of Trustees of the School, and the ceremony’s guest speaker, and Ms. Julie Anne Gilbert, Head of the British School. During the event, GFH has announced four Awards for Top Academic Performer, Community Contribution, Social Participation, and Leadership.

Commenting on the occasion, Mr. Hisham Alrayes, said, “We are delighted to mark this important occasion which sees students from the British School achieve this important milestone and advance into the next phase of their academic careers with the strong foundations and knowledge they have gained through their time at the School. Since acquiring the School last year, GFH has worked closely with management and they, in turn, with faculty, students and parents to ensure that the School develops and provides the best international curriculums, strategies and initiatives to prepare our students to compete and succeed in this increasingly global, dynamic and competitive world. BSB will be witnessing substantial developments in the coming few years with plans to expand its campus facilities and be a regional base for reputed international educational groups.”

Ms. Julie Anne Gilbert, Head of the British School, said, “At this time of year, when I see all the different faces, from so many different backgrounds in front of me at the Graduation Ceremony, I wonder what it is that makes our school so special. Is it the ‘British part of the school’s name, with an emphasis on good manners, resilience and determination? Is it the ‘Bahrain’ part of the school’s name with Bahrain’s lightness of touch, warmth, appreciation and tolerance? I suspect that is the magical combination of the two that is the essence of The British School of Bahrain.”

The British School of Bahrain continues to rank among the top K-13 institutions in the Kingdom of Bahrain and the GCC region. Year after year, the School delivers outstanding examination results at A level, BTEC and GCSE in line with its mission and dedication to academic excellence, responsibility and individuality. In 2016, the School also introduced the IB Diploma Program, which aims to develop internationally minded students who hope to create a better and more peaceful world.