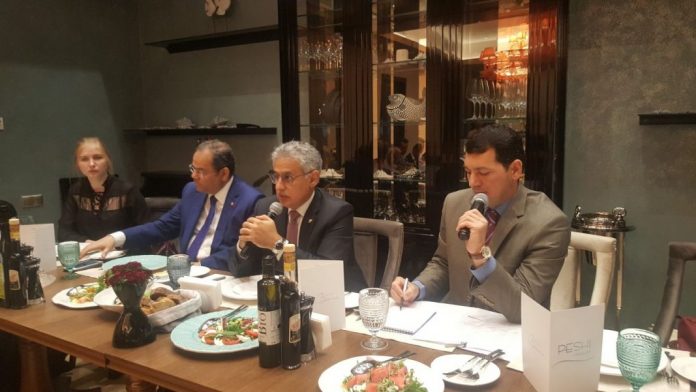 The Bahrain Tourism and Exhibitions Authority (BTEA) hosted an event for the Russian media on the sidelines of the recent inauguration of its Representative Office located in the Republics of Russia. The office was inaugurated in the presence of the Minister of Industry, Commerce and Tourism, H.E. Mr. Zayed bin Rashid Al Zayani and the Ambassador of the Kingdom of Bahrain to the Russia, H.E. Mr. Ahmed Al Saati.

During the media lunch event, the Director of Tourism Marketing and Promotions at the BTEA, Yousif AlKhan along with representatives from the national carrier of the Kingdom of Bahrain, Gulf Air, met with a number of media to discuss the Kingdom’s key touristic offerings and positioning.

“We are very pleased and proud to have launched our representative office in Russia. The launched representative offices will contribute to the development of the tourism sector in the Kingdom of Bahrain and become a sustainable economic resource,” said the Minister of Industry, Commerce and Tourism, H.E. Mr. Zayed bin Rashid Al Zayani.

H.E. Mr. Al Zayani also stated that the strong and long standing relationship between the Kingdom and Russia will enable both nations to utilize this opportunity to enhance relations, increase trade and the tourism influx which will contribute to the growth and development of the tourism sector.

The inauguration of the representative office comes as part of the BTEA’s long-term strategy to develop the Kingdom’s tourism sector and strengthen its position on a regional and international level under the slogan of ‘Ours. Yours.’, which contributes towards the national economy and the 2030 Economic Vision.

Zain Bahrain, a leading telecommunications operator in the Kingdom of Bahrain, fuelled by the passion to empower Bahraini youth with specific skills, recently announced...
Sports This Week