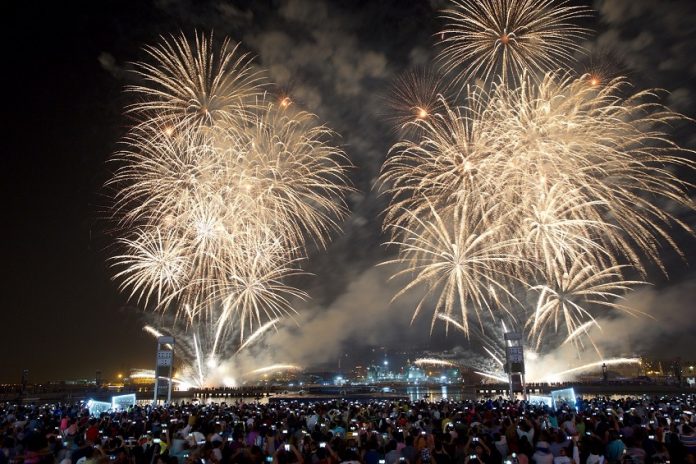 Dubai, UAE, 31 August 2017: Visitors from across the GCC can look forward to celebrating the Eid Al Adha holiday in Dubai thanks to a fantastic line-up of exciting events and activities taking place across the city, as announced by Dubai Festivals and Retail Establishment (DFRE), an agency of Dubai’s Department of Tourism and Commerce Marketing (Dubai Tourism).

To celebrate the Eid holiday, there will be two concerts taking place in the city by two renowned Arab music icons. On 2 September, Emirati singer Shamma Hamdan will perform at Dragon Mart 2 at 6.30pm, while later in the week Mohammed Abdo will take to the stage at Dubai World Trade Centre on 6 September at 9pm to delight fans with a raft of hit songs.

The highly anticipated fireworks will take place on the first day of Eid at Dubai Festival City at 9pm and 11pm, promising to be a spectacular musical display that’s not to be missed.

Mesmerising firework displays will also take place daily at The Beach opposite JBR from 31 August to 3 September at 8.45pm. The venue will also host various performances on a daily basis to keep families entertained throughout the Eid holiday.

Be the first to step foot into La Perle as it opens its doors for the first time on 31 August. A live masterpiece, produced by legendary director Franco Dragone, La Perle is a breath-taking fusion of immersive artistic performances, imagery and technology. Be ready to be transported to a new era of entertainment this Eid.

Sports-lovers can head to Dubai World Trade Centre, which is hosting the seventh edition of Dubai Sports World featuring sports, tournaments, academies and activities designed for both serious athletes and sporting novices of all ages.

Little ones will have the last chance to say goodbye to their favourite character, Modhesh, at Modhesh World as he leaves on 3 September to return next year. Kids can enjoy virtual reality workshops, an array of performances, various amusement activations and delicious bites served from food trucks.

Dragon Mart 2 will welcome families with a range of activities for everyone to enjoy. During the week of Eid Al Adha, there will be a daily 20-minute live interactive musical adventure show starring Twilight Sparkle, Rainbow Dash, Pinkie Pie, Spike and Applejack. For adventurists, there will be a ‘Transformers Workshop’ which will allow kids to test their skills through different activities and games in a highly interactive themed area which will take place twice a day.

Parents can treat the little ones to the world’s largest indoor theme park, IMG Worlds of Adventure, where they can enjoy a variety of parades and live performances. With multiple adventure zones and thrilling rides, as well as several restaurants offering a pleasant dining experience, it promises to be an ideal day out for the entire family.

Full details of this year’s jam-packed calendar of events over Eid Al Adha can be found at https://www.visitdubai.com/en/, or follow @visitdubai for the latest information.