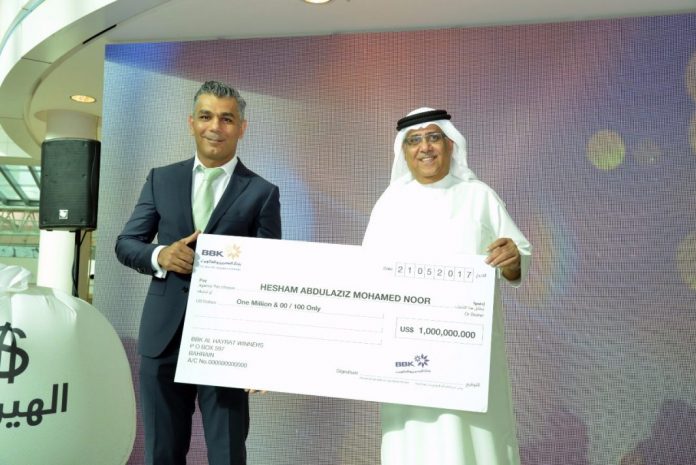 Celebrating the second instant millionaire in 2017 from Al Hayrat

Al Hayrat, BBK’s unique savings account continues to present exciting opportunities for customers to win prizes while they save. Today, an elaborate handover ceremony was held in honour of the 2017 Al Hayrat winner of One Million USD. Mr. Hesham A. Aziz Mohammed Noor, Al Hayrat Instant Millionaire was escorted with his family in a Hummer limousine to the Seef Mall. He was welcomed by Mr. Reyadh Yousif Sater, BBK Chief Executive in the presence of BBK management.

Speaking at the award ceremony, Mr. Reyadh Sater said: “ I am delighted to present the second One Million Dollar prize from Al Hayrat in this year alone! I would like to congratulate the winner on this life changing win that will enable his dreams to come true. Mr. Hesham Noor is BBK’s Fifth instant Millionaire from Al Hayrat programme.

The raffle draw took place on May 3rd 2017, under the supervision of Ms. Lulwa Sulaibeekh of the Consumer Protection Unit at the Ministry of Industry, Commerce and tourism, as well as members of the top management of the Bank.

Mr. Hesham Noor, a pilot, was travelling when his name was announced by the bank as the lucky winner, and was informed of his win later on through a member of his family.

He was later on reached by the Chief Executive to personally congratulate him on winning this life changing prize.

“this is an unexpected and absolutely delightful surprise for me and my family, I am not yet decided on how I will be spending the prize, but I am very excited about my prospects, I feel very blessed”

Immediately after announcing Mr. Hisham Noor as the instant millionaire from Al Hayrat; Al Hayrat summer campaign was announced by the bank, offering its customers the chance to travel on their dream summer holidays by winning weekly Air miles that adds up to six Million Air Miles.