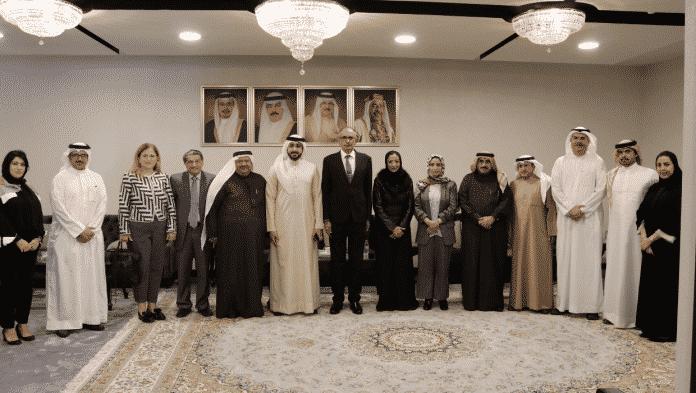 The Chief Executive Officer (CEO) of the Bahrain Tourism and Exhibitions Authority (BTEA), Mr. Nader Al Moayyed, received a delegation of members from the Board of Directors of the Association of Southeast Asian Nations (ASEAN) Bahrain Council at his office. It was headed by Sheikh Duaij bin Isa Al Khalifa, the Chairman of the Board of Directors of the ASEAN Bahrain Council.

During the meeting, the Board reviewed the past efforts of the Council. Discussing their participation in the China-ASEAN Expo. In addition to sharing the most important statistics and information related to the success of the Expo. They did this in the presence of Mrs. Feryal Nass, Mr. Yousuf Salahuddin, Mr. Talal Al Mannai, Mr. Nabeel Ajoor, Mrs. Sebahat Isik, Mrs. Leena Ahmed AlMannai, Mr. Khalifa AlMannai, and Mrs. Waheeda Qerashi.

On this occasion, the CEO of BTEA, Mr. Nader Al Moayyed, said. “Our meeting with the ASEAN Bahrain Council delegation was extremely fruitful. Itt enabled us to shed further light on a number of vital issues that will contribute to strengthening the ties of joint cooperation between our two respected institutions.”

“We were extremely pleased with the successful participation of the Council in the China-ASEAN Expo. An exhibition of this nature will undoubtedly create additional opportunities for collaboration. At various cultural, commercial, and economic levels. We look forward to working alongside the Council and to forming a specialized committee to further study the issues discussed. This includes drawing up strategic plans which will coincide with the opening of the new Exhibition and Conference Centre.” added the CEO of BTEA.

The ASEAN Bahrain Council is an independent, private, non-political and non-profit association, which was in 2017, which aims to encourage the number of investment opportunities available in the Kingdom, and dedicated to strengthening trade and commercial ties between the Kingdom of Bahrain and ASEAN Countries. The Council plays a major role in fostering deeper economic relations, advocating increased joint co-operations between the people and corporations of the Kingdom Bahrain and the ASEAN countries it represents, namely Indonesia, Malaysia, Philippines, Singapore, Thailand, Brunei, Vietnam, Cambodia, Laos and Myanmar.