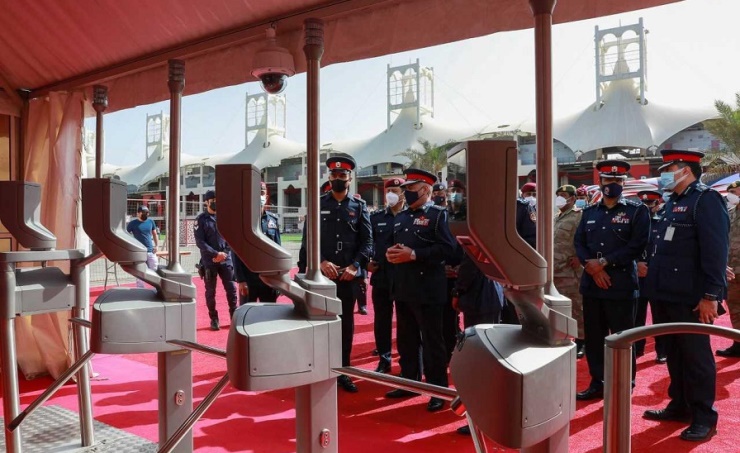 Chief of Public Security, Lieutenant General Taraq bin Hassan Al Hassan, inspected today the security preparations to ensure success of the Bahrain Grand Prix (Formula 1). He was briefed on the deployment of patrols, security checkpoints and the level of preparedness ahead of the international sporting event.

He hailed the directives of the Minister of Interior, General Shaikh Rashid bin Abdullah Al Khalifa, to take all measures to maintain the security of the race, the participants and the public. He said the Kingdom of Bahrain has the required experience to organise the F1 races in the highest international standards.

Police forces have completed all preparations and plans to provide the best security services, the Chief confirmed, calling upon the public to cooperate with the security forces and follow instructions for their safety. He said that the primary and emergency plans that were evaluated through some scenarios conducted by participating security authorities reflected the readiness of the forces and capability to implement them with efficiency while dealing with emergencies. The Chief revealed also the completion of coordination with concerned authorities for the security arrangements.

He said police would be deployed around the Bahrain International Circuit as well as the entry and exit points, highways and avenues leading to the F1 venue to ensure a smooth flow of traffic and maintain security and public order. He asserted that the security efforts weren’t only limited to the surroundings of the BIC, but also the whole of Bahrain to achieve comprehensive security. He called upon citizens, residents and visitors to enjoy the international event and the festive activities associated with the F1, wishing success for all to present the race in the best way.