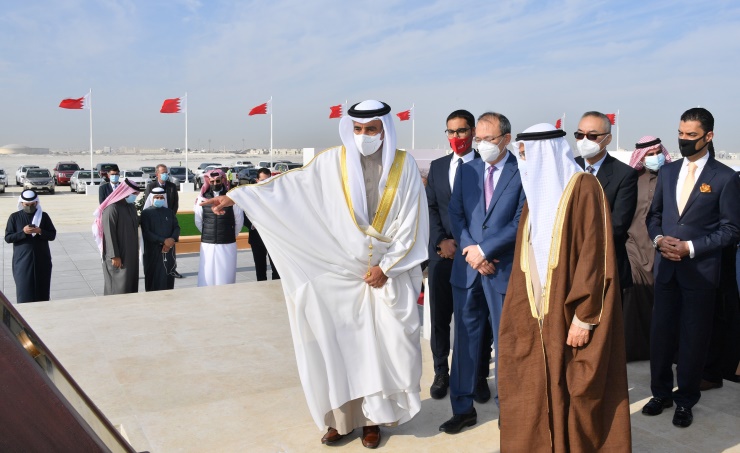 Following the directives of His Royal Highness Prince Salman bin Hamad Al Khalifa, the Crown Prince and Prime Minister, to build 3,000 housing units in the East Sitra Housing Project, and to expedite the delivery of housing services, Deputy Prime Minister and Chairman of the Ministerial Committee for Development and Infrastructure Projects, Shaikh Khalid bin Abdulla Al Khalifa, announced that construction works at the East Sitra Housing Project had commenced.

On this occasion, Shaikh Khalid bin Abdulla extended sincere thanks and gratitude to His Majesty King Hamad bin Isa Al Khalifa for his unwavering interest in meeting the citizens’ aspirations, through providing them with housing services.

This is embodied in the keenness of the government, led by HRH Crown Prince and Prime Minister, to continue implementing the Royal order to build 40,000 housing units, as reflected in the previous and current Government Action Plans.

The Deputy Premier asserted that HRH Crown Prince and Prime Minister had given orders to begin implementing the eighth housing town in the kingdom, which adds to the national housing gains, through the establishment of three towns in the previous century, namely the Isa, Hamad and Zayed towns, and four others over the past seven years, including the Khalifa, Salman, East Hidd and Al-Ramli towns. He added that the four towns have already been opened, and their units are being distributed to beneficiaries.

The Deputy Prime Minister indicated that the implementation of five housing towns at the same time is a quantum leap in the kingdom’s housing sector, noting that the idea of building towns has proved its success in accommodating the citizens’ demands, and creating modern and socially- homogeneous communities.

He pointed out that the Ministerial Committee for Development and Infrastructure Projects is closely following up on the implementation of all housing projects, through coordination with all the relevant ministries and service government departments to ensure they are provided with all the necessary facilities and services.

The Housing Ministry is implementing the 3,000-unit East Sitra Town Project in three phases, at a total cost of BD 260 million, covering also the infrastructure works.

Housing Minister extended deepest thanks and gratitude to HM the King and HRH Crown Prince and Prime Minister, marking the start of the construction works at the East Sitra Town Project, which, he said, will reflect positively on their unlimited support for housing services. He also paid tribute to Shaikh Khalid bin Abdulla for his constant follow up, extending similar thanks to the relevant ministries and government entities for their cooperation.

With its distinguished location and sea front, the project will include facilities and services that serve about 20,640 citizens, such as schools, kindergartens and nurseries, public parks, children’s playgrounds, houses of worship, health, social and cultural facilities, a youth club, commercial centres, petrol stations, water treatment station and a centre for visitors’ services, he said.

He added that the town also includes a 2.6-km sea front, sidewalks and 13-km bicycle lanes, noting that all facilities and services are in line with the kingdom’s efforts to achieve sustainable development goals, particularly the 11th goal on “making cities inclusive, safe, resilient and sustainable”.

He affirmed that the Housing Ministry will seek to accelerate the pace of the implementation of the project, in cooperation with the China Machinery Engineering Corporation (CMEC), in order to ensure that it is completed according to schedule.