There are many different types of beards...
CultureInside BahrainCultural activities launched to celebrate the Golden Jubilee of relations between Bahrain and India 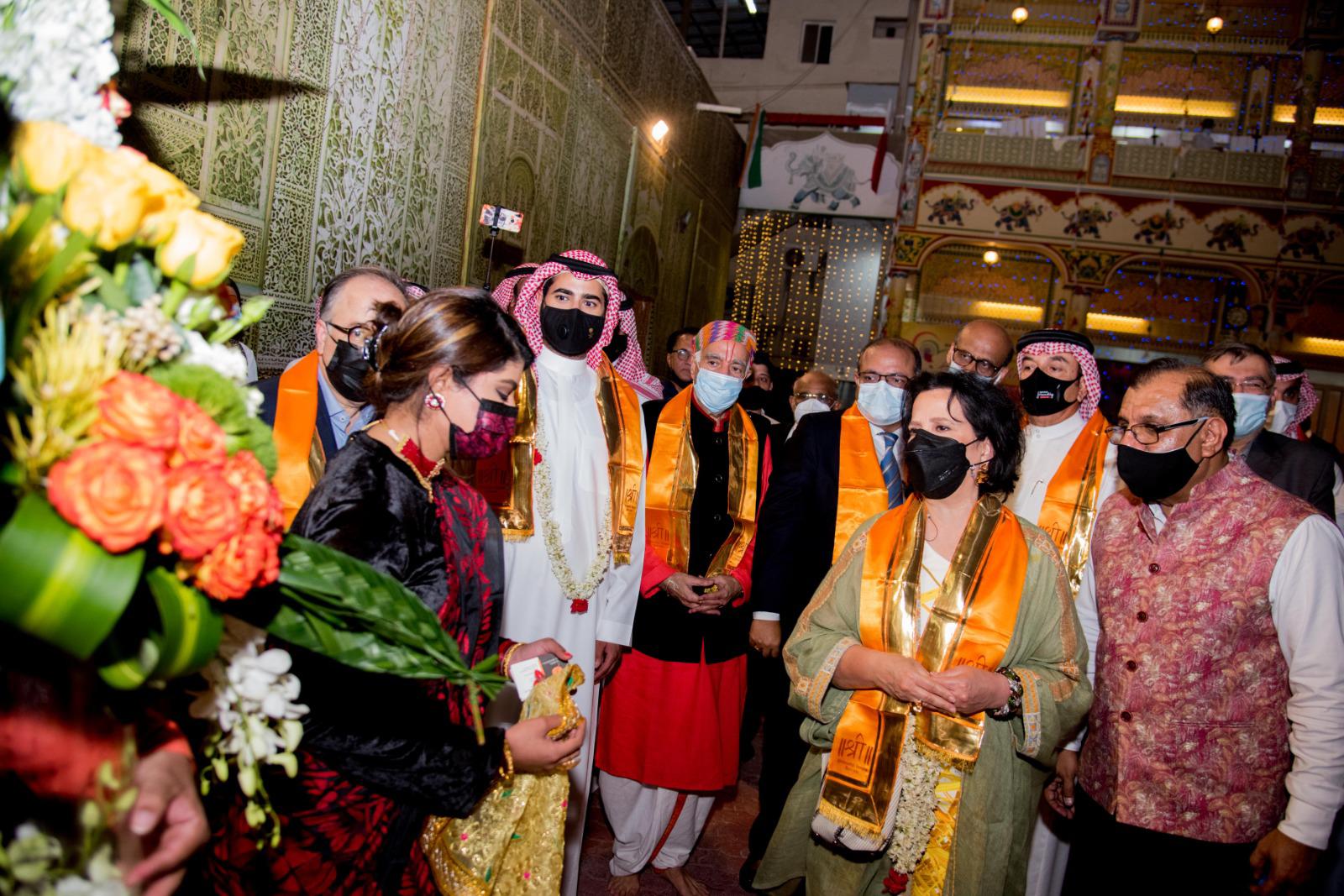 From Bab Al Bahrain, where the entrance to the ancient city of Manama with all its cultural and historical heritage, cultural activities to commemorate the Golden Jubilee of diplomatic ties between the Kingdom of Bahrain and the Republic of India were launched, October 12, in the presence of Bahrain Authority of Culture and Antiquities president Shaikha Mai bint Mohammed Al Khalifa, Foreign Affairs Consular and Administrative Affairs Under-Secretary Tawfeeq Al Mansoor and Indian Ambassador Piyush Srivastava in addition to prominent diplomatic presence as well as active personalities in both the Bahraini and Indian communities and those interested in cultural affairs.

“Culture has always brought us together to celebrate our common heritage and history and today we celebrate fifty years of diplomatic relations between Bahrain and India,” said Her Excellency Shaikha Mai bint Mohammed Al Khalifa on the occasion.

“With life returning to normal in Bahrain Little India is back to Manama to open new horizons for cultural exchange between the two nations and through our programme we present Indian culture with all its antiquity and beauty for all visitors to Manama.”

She stressed that Manama is a city of coexistence where pluralism reflects the richness of cultures meeting on its land.

She thanked the Indian Embassy in Bahrain and all the supporters of the programme to celebrate the Golden Jubilee of Indian-Bahraini relations, the Indian Community, those in charge of Little India and the Bahrain Authority of Culture and Antiquities team for their contributions towards this cultural achievement.

She stressed that their work enhances Bahrain’s position as a destination for cultural openness and co-existence among various segments of society.

His Excellency Foreign Affairs Consular and Administrative Affairs Under-Secretary Tawfeeq Al Mansoor stressed the depth of the existing bilateral relations between the Kingdom of Bahrain and the Republic of India.

He noted the strength of the ties between the two nations across various fields.

“October 12 is a historic day between the Kingdom of Bahrain and the Republic of India and while we see the flag of the Republic of India at the Bab Al Bahrain the Bahraini flag is now fluttering proudly at Qutub Minar in the Indian capital of New Delhi which is one of the most beautiful and historical monuments in India,” he stated.

“This occasion is another achievement in the relations between the two nations as we celebrate today not only fifty years of official diplomatic ties but centuries of deep-rooted friendship.”

His Excellency Ambassador Tawfeeq Al Mansoor emphasized the Kingdom of Bahrain’s appreciation for its relations with the Republic of India and welcomed future opportunities to further develop this close historical and friendly partnership for  many years to come.

“I am delighted to be part of this momentous occasion of the Golden Jubilee of diplomatic relations between India and the Kingdom of Bahrain,” said Indian Ambassador Piyush Srivastava.

“We have just witnessed the historic moment of lighting the iconic monuments of Bab Al Bahrain in the three colours of the Indian flag and Qutub Minar in Bahraini national colours.

“These are celebrations of our deep-rooted civilizational ties and multi-faceted bilateral cooperation which have been strengthened and diversified over the years with the vision, guidance, and strong commitment of the leadership of our two countries.

“I would like to thank the Bahrain Authority for Culture and Antiquities for putting together the magnificent week-long celebrations – starting today – at the Little India in Bahrain in the heart of Manama.

“I also thank the Indian community and our Bahraini friends for their support.

“I am confident that the long standing dynamic partnership between India and the Kingdom of Bahrain will reach even greater heights in the future.”

The opening ceremony kicked off with a light show of the Indian flag on the facade of Bab Al Bahrain, where the Bahrain Police Band presented a musical show.

Audiences at Bat Al Bahrain will be treated to evenings of Bahraini and Indian musical performances at Bab Al Bahrain until October 19.

The celebration then moved to the beat of the Bahrain Police Band to the “Made in Bahrain” store – where Indian artist Jaywant Naidu will perform traditional Indian folklore – followed by the inauguration of the “Little India” market passing through the various beautiful elements of Bab Al Bahrain.

This continues on a daily basis until October 19 from 6pm until 9pm where various Indian and Bahraini products, dishes and handicrafts will be showcased.  Then of Mohammed Bin Faris band presented a folklore musical show of the most beautiful authentic traditional Bahraini music.

Following the tour through Manama, which also includes a visit to the traditional Indian temple, activities moved to the Cultural Hall where a traditional folklore performance by Indian artist Jaywant Naidu, at 8pm was held as part of the International Bahrain Musical Festival – in its 30th edition. During the performance, artist Jaywant, along with other musicians, performed classical northern India music on the guitar – a musical instrument he started learning to use when he was 8-years-old.

The programme to celebrate the Golden Jubilee of diplomatic relations between Bahrain and India includes two lectures at the Bahrain National Museum on the relations between the two nations – on October 13 at 7pm presented by speaker Bob Thaker and October 17 at 7pm by speaker Yousif Sallahuddin.

Meanwhile, interactive activities will start on October 15, with a photography tour in Little India organised by the Bahrain Authority for Culture and Antiquities in collaboration with Photo Bahrain and Fujifilm at 5pm. On October 16, the Art Center will host two workshops on the hard of hand-block printing which will be supervised by Kala Foundation for Artistic Design.

In the interest of the public’s safety and to follow precautionary and preventive measures in place to limit the spread of Covid-19, the Bahrain Authority for Culture and Antiquities notes that attendance at internal events is limited to those who have received the green shield, while those who have been vaccinated and non-vaccinated can attend external activities within the allowed numbers determined by the authority.

The programme to celebrate the Golden Jubilee of diplomatic relations between Bahrain and India is held collaboration with the Indian Embassy in Bahrain, in addition to the following cultural associations: Maharashtra Cultural, Bahrain Odia Samaja, Telugu Kala Samethi, Bahrain Kannada Sangha and Bahrain Keraleeya Samajam.

For more details, you can visit the Bahrain Authority for Culture and Antiquities’ website www.culture.gov.bh or follow the authority’s accounts on social media at @CultureBah.