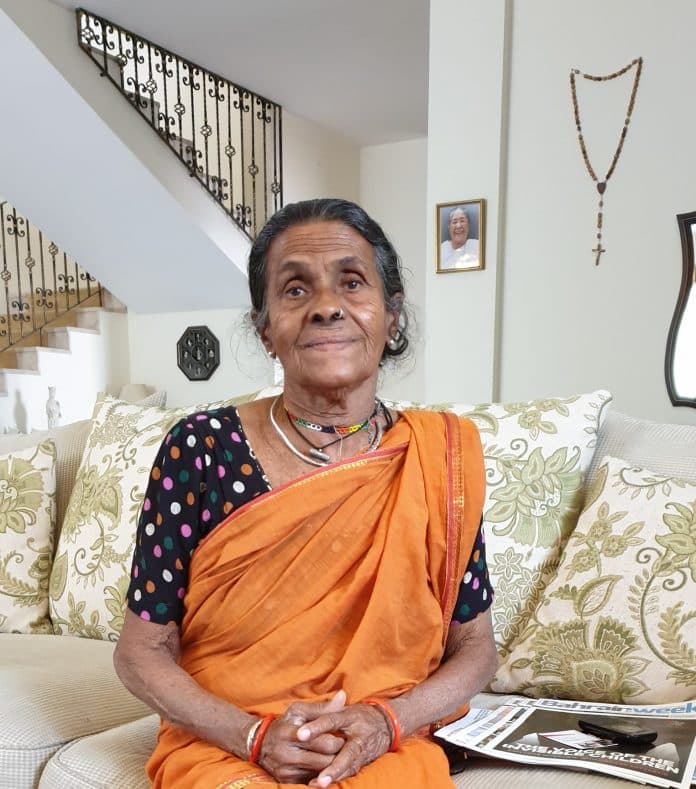 Mercy Mathew, popularly known as Daya Bai, strives for the welfare of tribal communities in Central India. She had recently visited the Kingdom as she was honoured as the eminent social worker by Capital Trustees, Board chairman Salah Tarrada with the Syro Malabar Society’s Work of Mercy Award 2019.

“When the organizers had called me for the event, I told them that I am not interested in felicitations and my time is dedicated to the fight against Endosulfan. They wished to be a part of my fight and agreed to offer assistance for the creation of the rehabilitation village for the Endosulfan victims.

Bahrain is a great place, peaceful and not as materialistic as its neighbours.” Dayabai told about the Kingdom’s support in her campaign to end the atrocities of Endosulfan usage in Kerala, the Southern State of India.

The state government and Plantation Corporation of Kerala was spraying endosulfan on the 12,000 acres of cashew plantations for 20 years. Exposure to the pesticide made many people in the area bedridden or mentally challenged. Many children in the area became physically and mentally disabled by the indiscriminate use of the pesticide.

The endosulfan victims had filed a contempt of court petition against the government for not complying with a January 2017 order of the Supreme Court to disburse Rs 5 lakh to all the victims of the toxic pesticide.

“There was a clear effort to silence the movement. People who were fighting against the endosulfan later turned in for it. What I continually do is expose the atrocities of endosulfan.

I presented some theatrical depiction of the Endosulfan detriments. The audience in Bahrain were shocked by the horrors of Endosulfan. Many people approached me afterwards and offered financial support for this movement.

I am not interested in the financial support at the moment. What I need is their single voice to become collective and to reach the authorities. The collective voice will compel them to make a beneficial verdict for the victims.” Dayabai insisted that the authorities should bring in remedial actions for the endosulfan victims.

A protest was conducted in the beginning of 2019 where Daya Bai went on a hunger strike. The victims of Endosulfan tragedy joined her with the child victims of the deadly pesticide, whose effects continue to affect newborns, years after it was banned in the state.

“There are 20 villages affected by the use of endosulfan. However the government insisted that they will give compensation for villages in the 2km radius that include only 11 villages. That was utter negligence of the plight of the victims who were exposed to the deadly pesticides for more than two decades.”

The support came from all sides in favour of the victims and the pressure increased on the authorities to change their decision. The authorities agreed with the demands of the protestors, the effects of which are yet to happen.

Mercy Mathew was born in an affluent Christian family in Kerala and had a comfortable childhood. She has a twin brother and grew up in the family of freedom fighters listening to the inspiring stories of Mahatma Gandhi and other great leaders.

“I was concerned about the untouchability and the ill treatment of poor people in the society. Even after attaining the freedom, there was a tendency to ignore these people. I have been reading about the services undertaken by the Missionaries in North India and went to Bihar to join them. However, I didn’t connect myself there and it was during my works with the tribal area in Madhya Pradesh that I felt that I had found my path.”

Daya Bai’s solo struggles represent the forest dwellers and villagers in Bihar, Haryana, Madhya Pradesh, Maharashtra and West Bengal. She also assisted the commoners in Bangladesh during the war there. She is settled down among the Gonds of Chhindwara district in Madhya Pradesh.

Daya Bai was active in the Narmada Bachao Andolan (NBA), an Indian social movement consisting of native tribes, farmers, environmentalists and human rights activists. They protested against the number of large dams being built across the river Narmada. The construction of the dam violated policies on the environment and resettlement of the people on the shores of the river.  As an after effect, the court ruled for Andolan, effecting an immediate stoppage of work at the dam and directing the concerned states to complete the rehabilitation and replacement process.

Daya Bai, who practises the theology of liberation and set up a school in the Barul village. Her ideas of the Swayam Sahayatha Group, as a tool for the eradication of poverty; earned her the wrath of the middlemen, the moneylenders and village chief.

“Whatever values I have in my life were instilled in me by my parents. They taught me to respect others and to lead a simple life.

The over use of mobiles and social media have turned the present generation too much materialistic. We should open our eyes and ears to the world around you by listening to the inner voice. I prefer active volunteering than radical propagandas in the social media.”

For the first time, the global sports event dedicated to people with special needs held in the Middle East. The Special Olympics World Games Abu...
Read more
Bahrain for All

Interview with Dr May bint Sulaiman Al Otaibi : The Visionary Educationist in the Kingdom

Dr. May Bint Sulaiman Al Otaibi, Founder and Chairperson of the Board of Trustees of the Bahrain Bayan School is committed to empowering young...
Read more

Gulf Air - the Kingdom of Bahrain’s national carrier – in line with its boutique strategy to add boutique leisure destinations to its network,...
Inside Bahrain

"They know that the sea is dangerous and the storm terrible, but they have never found these dangers sufficient reason for remaining ashore." -...
Entrepreneurial Journey

Google is “previewing” a new feature here at CES for the Google Assistant on Android phones that turns it into a supercharged screen reader....
Yoga

In Ayurvedic tradition the Kapha Dosha are the mind and body type associated with earth and water. It entails structure and stability in the...
Management Principles