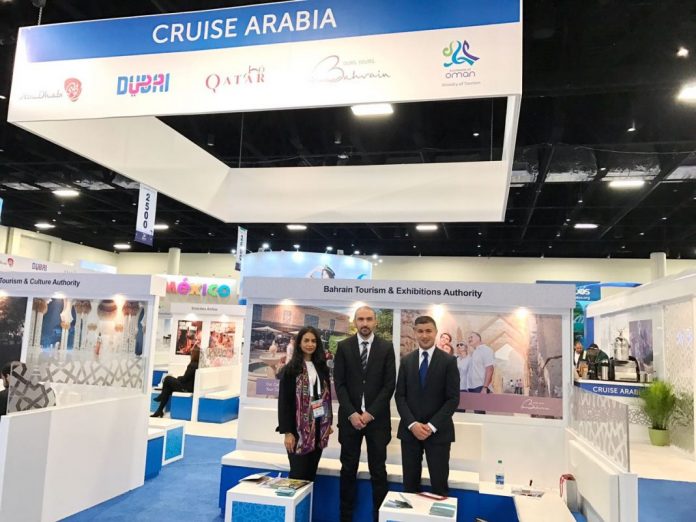 In-line with Bahrain Tourism and Exhibitions Authority’s (BTEA) aim to further promote the Kingdom as a touristic destination, an official delegation took part in the ‘Seatrade Cruise Global’ Event held between the 13th until 16th March 2017 in Florida, USA.

The delegation included Ali Al Shehabi and Anas Al Amer from BTEA and Amal Jamal from the Economic Development Board (EDB). The representation in the event came as a part of a comprehensive team representing the Gulf region under the name of ‘Cruise Arabia’.

“We are delighted to participate once again alongside the team representing ‘Cruise Arabia’ with an aim to promote the Kingdom as an ideal destination. We aim to participate in international conferences and exhibitions to meet industry experts and increase the number of visitors coming to the Kingdom and further develop the industry and overall national economy,” said Yousif Al Khan, Director of Tourism Marketing and Promotions at the Bahrain Tourism and Exhibitions Authority.

“Last year, BTEA achieved positive results in enhancing tourism through visitors coming via cruise ships, as it received the first MSC ship. The number of cruise ships has increased to 43 in 2016 – 2017 season from 31 ships in 2015 – 2016 season which increased the number of visitors from 57,000 to 92,000 during the same period,” he added.

The participation is in line with the Kingdom’s tourism strategy that was launched in cooperation with the EDB in 2016 under the brand, ‘Ours. Yours’, focusing on four pillars; awareness, attraction, access and accommodation. A key integral component of the strategy is to develop the sea ports in the Kingdom in order to further attract yachts and cruise ships.

‘Seatrde Cruise Global’ serves as the ideal platform to promote the Kingdom touristic attractions in the industry, the exhibitions brings together over 700 exhibitors from 93 countries attracting more than 10,000 visitors throughout its duration.

Chairman of Enma Mall, Khalid Rafea, has announced the exclusive appointment of Global Real Estate advisor, Savills. As a result, Savills will take over...
Read more
Wheels and Gears

I never thought of advertising my business when I was a small shopkeeper. The word-of-mouth publicity among customers was sufficient for me in those...
Inside Bahrain

Gulf Air, the national carrier of the Kingdom of Bahrain, has appointed Sh. Ali bin Mohammed Al Khalifa as Director Strategy and Planning to...
Tech