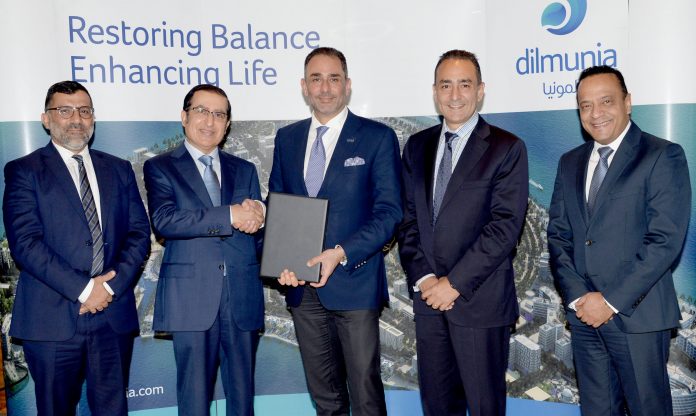 Ithmaar Development Company (IDC), the Development Manager for Dilmunia at Bahrain announced the award of the early works package for the Dilmunia Grand Canal & Marina. The Grand Canal will cut through the entire stretch of Dilmunia in a semi-circular route, making it Bahrain’s largest man-made water body and providing breathtaking vistas to surrounding developments within Dilmunia, and one of Bahrain’s longest continuous promenades to residents and visitors of the island.

Making the announcement, Mohammed Khalil Alsayed, the CEO of IDC said that after a robust tendering process, IDC is pleased to appoint NSCC International for the execution of the early works package. He added that NSCC International is a reputed Abu Dhabi based contractor in the field of foundation engineering, ground improvement, onshore marine works and horizontal directional drilling. NSCC’s track record in the GCC includes works in Abu Dhabi, Dubai and in Bahrain, where it was engaged for two tower projects in Bahrain Bay.

Commenting on the award, Jean-Claude Bejjani, the Project Director of Dilmunia stated that the awarded works in Dilmunia consist of soil improvement, soil levelling and contiguous pile works. These works are preparatory to the construction of the Grand Canal, which will commence after the execution of the early works. The contract for the early works package valued at US$4.5 million, commenced in mid-December 2018 and is targeted for completion in mid-March 2019.

The Dilmunia Grand Canal and Marina is a major element of the development. The Grand Canal will feature public promenades, geysers, water fountains, water walls, cascades, boardwalks and viewing decks. With a total length of 1.7 kms, and a width spanning 15 to 35 meters throughout the Grand Canal, it will have sea water pumped in around the mid-point of the Canal with the water flowing via gravity in two opposing directions of the entire canal.

Mohammed Khalil Alsayed further stated that IDC and the stakeholders in Dilmunia look forward to a smooth and timely execution of the works so as to enable IDC to proceed further in the construction of the Grand Canal and Marina. He concluded by saying that with properties in Dilmunia now being allowed for purchase by foreign nationals and the increasing number of inhabitants in the island, its attractiveness as a favoured destination has gained further traction.

Khalil N. Khouri, the CEO of NSCC International echoed the views of Mr. Alsayed and stated that they are honoured to have been awarded the package at this critical project stage. He added that NSCC’s experience in executing projects in the GCC and Bahrain is a testament to their experience.

Issam N. Khoury, Vice President of NSCC International overseeing the execution of the early works package, said that the NSCC team lead by Hazem Nour, the Project Director, is keen to demonstrate its capability, and having worked closely with IDC’s team in the past few months, is confident of delivering on the targets.

Dilmunia completed its Second Phase Infrastructure Works in December 2017, and awarded the Third and Final Phase of Infrastructure Works in early 2018, and with it ensuring the availability of all services to developers constructing on the Island and its first residents. The commencement of the Grand Canal and Marina works, has set the tone for the upcoming attraction IDC it is set to unveil together with stakeholders of Dilmunia in the upcoming year, which will make Dilmunia the destination of choice for residents and investors in the Kingdom of Bahrain.

Dilmunia offers a range of residential and commercial amenities, with development’s completed including The Treasure by Bin Faqeeh Development Company, The Essence of Dilmunia by Ahmed Al Qaed Group, and Seavilla by IDC. Projects under construction include: CanalView by Naseej B.S.C (c), The Hanging Gardens by Ahmed Al Qaed Group, Al Tijaria Resort Project (The Commercial Real Estate Development Co) and the Mall of Dilmunia, a family-centric and entertainment facility set for completion in December 2019.

The USD 1.6 billion Dilmunia Project is a mixed-use development built on a man-made island off the coast of Muharraq with a unique health and wellness anchor including residences, a hotel and leisure and shopping districts anchored around a health and wellness cluster. The development of the ambitious 125-hectare man-made island is being managed by IDC, which is a wholly-owned subsidiary of Ithmaar Bank, a Bahrain-based Islamic retail bank with its shares traded on both the Bahrain Bourse, Dubai Financial Market and the Kuwait Stock Exchange. Ithmaar Bank is also the Investment Manager of Dilmunia Development Fund.