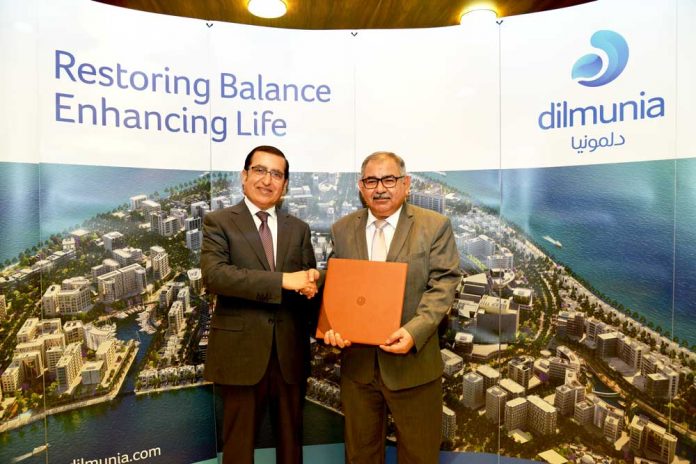 Dilmunia at Bahrain has signed on as a Diamond Sponsor of BIPEX 2017 held from 26 to 28 October at the Bahrain International Exhibition & Convention Centre, is under the patronage of His Excellency the Deputy Prime Minister of the Kingdom of Bahrain, Shaikh Khalid bin Abdulla Al Khalifa.

Dilmunia is expected to be a highly sought-after destination among both locals and expatriates due to the unique ‘health and wellbeing’ theme of its master plan, which includes wide open spaces and lush greenery. Its master developer Ithmaar Development Company (IDC) recently announced a major retail and leisure destination in the kingdom, Mall of Dilmunia, which will boast more than 200 outlets with a total built up area (including a spacious underground car park) of 125,000 sqm and a gross leasable area of 47,300 sqm. With construction already underway, Mall of Dilmunia has received interest from retailers and renowned leisure operators from across the MENA region.

Dilmunia aims to tap into the fast-growing health and wellness industry by highlighting holistic well-being through its wellness centres and range of five-star deluxe spas and boutique hotels. It also offers world- class residential sub-developments, commercial facilities and recreational amenities. The project is expected to provide housing for approximately 15,000 residents, as well as create thousands of highly skilled jobs in the medical, well-being, hospitality and retail sectors.

Dilmunia’s exhibition presence will showcase completed and near completed developments including; Seavilla consists of unique single-plot sea-front; the Treasure at Dilmunia, which has commenced handover of its first apartments to residents earlier in October; and the Essence of Dilmunia, which is in its final stages of construction. Upcoming Dilmunia properties that will be showcased at Bipex include Residence Sharq, CanalViews, and The Hanging Gardens at Dilmunia. In addition to these offerings, Dilmunia is introducing a limited number of single villa plots for end-user buyers during the exhibition, and showcasing prime-high rise buildings in the next stage of the development.

Commenting on the participation, IDC CEO Mr. Mohammed Khalil Alsayed said “We are proud to be in the tenth edition of this event, which will help create long term value for developers and real estate buyers and investors. We want to share our vision for promoting balanced living through integrating practicality, well-being and peace of mind. BIPEX is an ideal platform for us to reach out to our target audiences, who we look forward to updating them on the progress and offerings of Dilmunia.”

Dilmunia lies off the north-eastern coast of the Island of Muharraq. Its proximity to the Bahrain International Airport and easy accessibility to the King Fahd Causeway provides developers with a location well-connected to the prosperous GCC community at large, as well as internal transportation links to residential, commercial and industrial development zone. Master developer IDC is a wholly-owned subsidiary of Ithmaar Bank, a Bahrain-based Islamic retail bank.

BIPEX is an annual event that brings together major Bahraini real estate investors, development companies, financial institutions, legal institutions and consumers to showcase projects and negotiate in an open environment. Organised by Bahrain Society of Engineers (BSE), BIPEX continues to grow as a direct result of an increase in the number of real estate projects among the public and private sectors.

Last year’s exhibition highlighted real estate assets worth $60 billion, a significant rise from $52 billion in its previous edition. The 2015 show attracted more than 7,000 unique visitors of whom approximately a quarter traveled from outside of Bahrain.