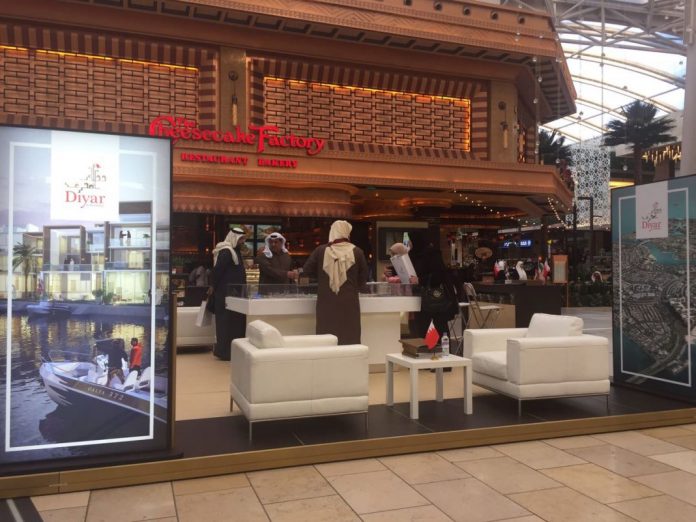 Diyar Al Muharraq Announces the Exhibition of its Projects in Kuwait

Diyar Al Muharraq, one of the leading urban developers in the Kingdom of Bahrain, announced the exhibition of its master-planned project in the Avenues Mall, the largest luxury shopping destination in Kuwait.

Diyar Al Muharraq’s decision to exhibit its many projects at the Avenues Mall in Kuwait stems from the enormous success in sales and exposure that it received through many of its previous international and local exhibitions, such as those most recently held in Bahrain City Centre, and its very own Dragon City. This prompted Diyar Al Muharraq to raise the degree of its efforts towards spreading awareness on its many revolutionary offerings on a regional level as well, in order to substantially augment its alluring nature amongst both potential inhabitants and tourists from the G.C.C.

In line with these strives, Diyar Al Muharraq aims to setup and run Diyar Sales booths and basic information and registration centres in the different countries spanning the region.

On this occasion, the Chief Executive Officer of Diyar Al Muharraq, Dr. Maher Al Shaer, said: “This is a pioneering moment for us at Diyar Al Muharraq as it is the first time that we are exhibiting our project at a venue such as the Avenues, which is not only the largest mall in Kuwait but is considered one of the largest shopping destinations in the world as well. Therefore, it brings me great pride and joy to be able to announce this showcasing as, due to its popular nature in the Kuwaiti social culture, this innovative initiative is guaranteed to bring us substantial exposure and publicity for all our current projects.”

“To reach out to the public in the Gulf region is of paramount importance to us as some of our biggest potential investors hail from these countries. Diyar Al Muharraq is a city within a city that was envisioned to enhance the lives of both Bahraini residents and the people from the surrounding countries as well and this exhibition serves as a focal, yet initial, point of our vision. Therefore, we welcome the people of Kuwait to view our exclusive development and the diversity in our elite offerings at the Avenues Mall as they hold the promise of life-changing deliverance,” he added.

Diyar Al Muharraq will occupy a prominent booth on the Ground Floor of the Avenues Mall wherein it intends to showcase its Master Plan, along with the eclectic mix of projects that it encompasses.

Additionally, highly lucrative commercial projects such as the Star Commercial Villa Plots, which were lunched for sale in February 2017, the B5 Residential Buildings Plots, Light Industry/Logistics and Warehousing Plots and the Commercial Showroom Plots will be highlighted during the exhibition as well.

The professionally certified Diyar Sales Team will be on hand at the booth, distributing comprehensive brochures and answering questions pertaining to any aspect of the master-planned development.

The American University of Bahrain (AUBH), re-opened its campus in Riffa, following an orientation session for the incoming Class of 2024 students. AUBH Founding...
Read more
Sports This Week