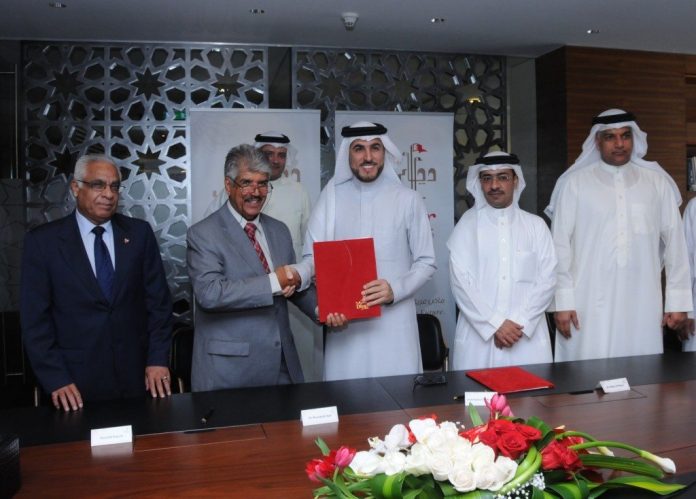 Diyar Al Muharraq, one of the leading urban developers in the Kingdom of Bahrain, announced the signing of an agreement with the Royal Charity Organization (RCO) for the donation of a plot of land for the purpose of building a Kindergarten.

Upon signing the agreement, Diyar Al Muharraq Chairman, Mr. Abdulhakeem Alkhayyat said: “It is with absolute pride and sense of accomplishment that I on behalf of Diyar Al Muharraq, announce our participation with the Royal Charity Organization for the establishment of a Kindergarten that would serve the Bahraini orphans under the sponsorship of the RCO in addition to the children of families living in Muharraq, as we believe that children are the future and therefore, we are honoured to be participants in providing opportunities to promote their creativity and enhance their overall skills and well being through this project. This undertaking is, thereby, in line with our commitment to fulfill our duties towards our communities. We constantly strive to feed off our ethical aspirations and hope to emulate these actions in our upcoming projects as well. It is with great pleasure that I heartily welcome this collaboration as it serves to reflect positively on the ethics of our endeavours and will greatly benefit countless children over the coming years.”

Mr. Abdulhakeem Alkhayyat expressed his deep appreciation for the prominent role the Royal Charity Organization plays in supporting charitable and humanitarian causes around the world. He also affirmed that Diyar Al Muharraq is honoured to be partnering with the RCO in supporting Bahraini children; an initiative that is considered of utmost priority by the organization in order to successfully achieve a tangible partnership between the RCO and the other sectors in society.

From his side, RCO General Secretary Dr. Mustafa Al Sayed reiterated the Royal Charity Organization’s aspirations to seek opportunities that would be of ultimate benefit to children in need in the Kingdom of Bahrain in accordance with the directives of His Majesty King Hamad bin Isa Al Khalifa and His Highness Shaikh Nasser bin Hamad Al Khalifa, His Majesty the King’s Representative for Charity Works and Youth Affairs and Chairman of the Board of Trustees of the Royal Charity Organization in this highly regarded concern.

Dr. Al Sayed expressed his gratitude and appreciation to Diyar Al Muharraq for supporting RCO’s humanitarian initiatives and said: “Diyar Al Muharraq is well known for their philanthropic activities and the support which they extend to the Bahraini community in aid of various humanitarian projects and initiatives in a number of social and development sectors within the Bahraini society.”

“We thank Diyar Al Muharraq for their generous donation of this land plot on which we intend to build a model kindergarten to serve the children of families living in Muharraq. Furthermore, orphans sponsored by RCO will be enrolled in the kindergarten free of charge whereas other children will be charged a reasonable fee. The income from the kindergarten will benefit families in need, under the RCO umbrella,” he added.