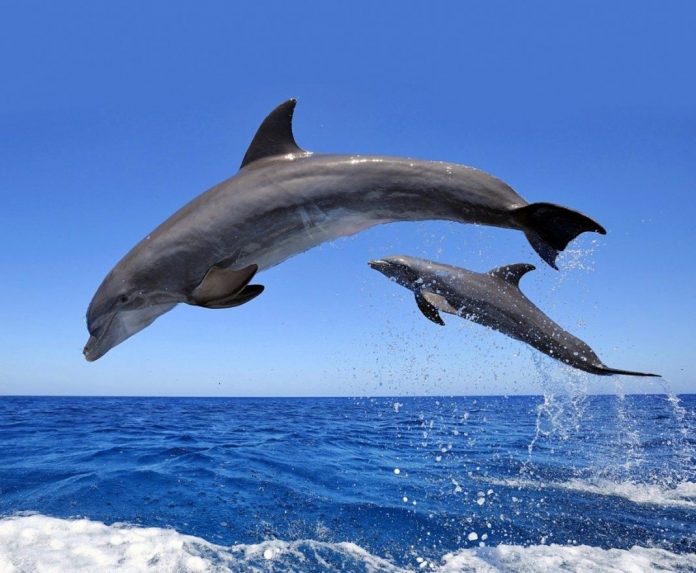 The recent slaughter of a Chinese white dolphin off the coast of Bahrain has highlighted the confusion in many fisherman’s minds regarding the difference between dolphins and fishes.

Dolphins are mammals that are closely related to whales and porpoises. There are about 40 species of dolphins and they range in size from 1.2 m and 40 kg (Maui’s dolphin) up to 9.5 m and 10 tonnes for the killer whale, which is a large dolphin. They are found worldwide, mostly in shallow seas, and are carnivores, eating mostly fishes and squid. The shallow seas around Bahrain are perfect habitat for dolphins.

Unlike fishes, which have gills and breathe under water, dolphins are mammals with lungs and must rise to the water surface to breath. Whereas fishes have fins, dolphins have flippers that resemble fins but are derived from legs modified for swimming. The bodies of dolphins are streamlined like those of many fishes so that they can swim rapidly through water, which is 784 times denser than air. Most fishes lay eggs whereas dolphins give birth to live young which they suckle with milk. Dolphins evolved from mammals that lived on land and returned to the sea about 55 million years ago.

Dolphins have very good eyesight, both in and out of the water, and can hear frequencies that are ten times above the limit of adult human hearing. When swimming they hear mainly through their lower jaws, which conduct sound to the middle ear. The teeth on their jaws also function as antennae to receive incoming sound and to pinpoint the exact location of a prey.

Dolphins are one of the most intelligent animals on Earth. They are quick to learn tricks in captivity and to communicate with their human handlers, and they are also very cunning hunters. Dolphins are highly social animals that may live in pods of up to 1,000 individuals.

They establish strong social bonds and will stay with injured individuals, even helping them to breathe. The moko dolphin in New Zealand has even been observed guiding a female whale and her calf out of shallow water where they had stranded, and they have also been seen protecting swimmers from sharks by swimming circles around them or by charging the sharks to make them go away.

The Chinese white dolphin Sousa chinensis reaches 3.5 m and 230 kg and is black at birth but changes to grey and then white as juveniles and adults. The analysis of growth rings in their teeth has revealed that they reach an age of about 40 years.

Dolphins are not fishes – they are much more advanced forms of life with sophisticated social behaviour and high levels of intelligence. All dolphins are strictly protected and they may not be caught or killed without a permit. It is the responsibility of everyone to ensure that these magnificent creatures continue to survive and thrive in the seas around Bahrain.