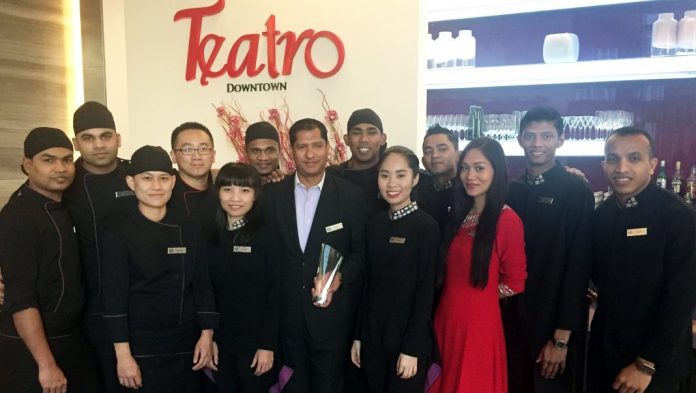 Downtown Rotana, the luxury hotel located in the heart of Manama, proudly celebrates the win of three distinguished international awards for the property and its restaurant outlets. The Hotel was declared the ‘Luxury City Hotel’ in Bahrain by the prestigious World Luxury Hotel Awards 2016 as recognition of its sustained commitment to excellence in hoteliering and outstanding achievement in the international luxury hospitality industry.

Downtown Rotana also proudly received accolades for its two restaurant outlets; its signature restaurant ‘Teatro Downtown’ was named Hotel Restaurant of the Year 2016 by the Luxury Travel Guide Awards 2016 and the Hotel’s all-day-dining venue “Flavours on 2” was crowned Best All-Day Dining Restaurant in Bahrain 2016 by Citi Fact Dining Awards, which was received during a ceremony held at the ART Rotana Amwaj islands Hotel.

Commenting on the awards, Patrice Cornee, General Manager of Downtown Rotana, stated: “We are delighted to be recognized as the Luxury City Hotel in Bahrain, which goes to show the quality of services on offer in our hotel. The hospitality sector is an ever-changing industry which requires you to manage customer expectations when they enter a luxurious hotel. This award stands testament to our commitment to reflect the high standards set by the Rotana Group and live up to the promise of setting the highest standards across our rooms, services, and facilities to create the perfect atmosphere for our guests.”

With regards to the recognition of its restaurants, Mr. Cornee continued: “Our signature restaurant “Teatro Downtown” has won several awards across the region, and winning our maiden award in Bahrain as the Hotel Restaurant of the year is a sign that we are determined to deliver the best fine dining experience and ambience to our customers that Teatro is regionally known for. It also gives us great pleasure that ‘Flavours on 2’ received an award voted by the public, and instills great confidence in the quality of our offering,” concluded Mr. Cornee.

Both the Luxury Travel Guide and World Luxury Hotel Awards represent the pinnacle of achievement in global hospitality. The Citi Fact Dining Awards celebrates Bahrain’s culinary offering including hotel restaurants, stand-alone restaurants, bars, pubs, and cafes in more than 30 categories. Downtown Rotana was nominated for 4 of these categories.

Bahrain International Circuit (BIC) continues its busy start for 2021 as it hosts the first Open Track Day of the new year on Saturday...
Read more
Sports This Week

Bahrain Raid Xtreme driver Nani Roma set out from Neom, towards Al-Ula for stage ten of the Dakar Rally 2021 in the #311 Hunter....
Read more
Inside Bahrain

Minister of Interior, General Shaikh Rashid bin Abdullah Al Khalifa, today received some new officers who took the oath in front of him. Chief of...
Read more
Inside Bahrain

The new 2021 Lexus IS was unveiled today by Ebrahim K. Kanoo via a unique and engaging virtual reveal at the Lexus showroom in...
Inside Bahrain

Formula 1 announced that the 2021 FIA Formula One World Championship will open its season in Bahrain. This follows the postponement of the Australian...
PR This Week

The College of Graduate Studies at the Arabian Gulf University (AGU) launched the first edition of its termly journal under the management and supervision...
Inside Bahrain

In line with the Kingdom of Bahrain’s commitment to develop its geospatial information sector, the newly formed National Committee for Geospatial Information Governance (NCGIG)...
Inside Bahrain

Gulf Air, the national carrier of the Kingdom of Bahrain, announces that starting from 28 January 2021 it plans to move its entire operations...
PR This Week

Ebrahim K. Kanoo, the sole distributor of Toyota vehicles in the Kingdom of Bahrain, welcomed the winners of the 14th edition of the “Toyota...
PR This Week