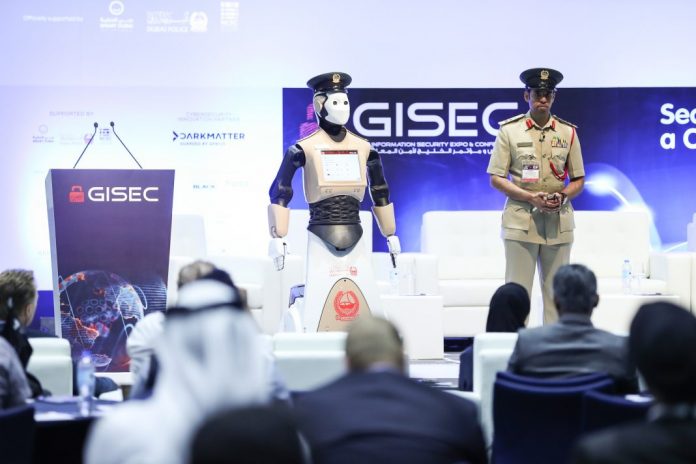 Dubai Police has welcomed a new member on to its force. He doesn’t need a visa, medical insurance or hours of training, and he is ready to engage with Dubai’s residents and millions of tourists across the city’s streets.

The world’s first operational robot policeman, officially joined the line of duty today, greeting guests at the opening of the 4th Gulf Information Security Expo and Conference (GISEC), including Lieutenant General Dahi Khalfan Tamim, Head of Security for the Emirate of Dubai, who opened the show and the co-located Internet of Things Expo (IoTx), which run until Tuesday 23 May at Dubai World Trade Centre (DWTC).

The autonomous Robocop, standing 170 centimetres tall and weighing 100 kilograms, is equipped with an emotion detector which can recognise gestures and hand signals from up to 1.5 metres away. The Robocop can also detect a person’s emotions and facial expressions – whether the individual is happy, sad, or smiling – and has the ability to change his expression and greetings accordingly to put people at ease.

When patrolling the streets, the Robocop which harnesses Internet of Things, Artificial Intelligence and the latest smart technologies, can use its facial recognition software to help police officers identify and catch offenders, as well as broadcast live video feeds.

“With an aim to assist and help people in the malls or on the streets, the Robocop is the latest smart addition to the force and has been designed to help us fight crime, keep the city safe and improve happiness levels,” said Brigadier-General Khalid Nasser Al Razzouqi, Director-General of Smart Services at Dubai Police. “The launch of the world’s first operational Robocop is a significant milestone for the emirate and a step towards realising Dubai’s vision to be a global leader in smart cities technology adoption.”

The Robocop will patrol the halls of GISEC until Tuesday evening before in high-density areas of the city. The RoboCop’s wide-ranging skills include the capability to map the insides of a building and navigate its path automatically via its self-control and drive feature.

With a built-in tablet device, people can complete smart police services through RoboCop using credit cards for payments, resulting in an enhanced customer service experience. RoboCop can also transmit and communicate in six languages, including Arabic, English and more. Additionally, the robot can chat and interact, respond to public queries, shake hands and offer a military salute.

Adding value to the existing police force, the robot’s integrated system allows it to be linked to various social media channels, such as Twitter, as well as artificial intelligence systems, mobile applications and websites, among others.

“Robots and autonomous machines are shaping and redefining our future and transforming the way we function. Technological advancements are enabling robots to talk, see, feel and react to objects and humans. The age of the robots is no longer coming – it has arrived,” said Trixie LohMirmand, Senior Vice President, Exhibitions & Events Management, DWTC.

Key sponsors of GISEC 2017 include DARKMATTER as the Cyber Security Innovation Partner, DigiRobotics as the Smart Manufacturing Partner, Gulf Business Machines as the Official Security Solution Sponsor, Cisco and Spire Solutions as the Platinum Sponsors and Infowatch as the Panel Sponsor.

Powered by GITEX TECHNOLOGY WEEK, the region’s leading Information and Communications Technology (ICT) event, GISEC 2017 is strictly open to the security and intelligence community, including government departments, business and enterprise. Visitor attendance to the exhibition halls is free of charge, although attendees must purchase tickets to attend the events’ conferences. For more information, please visit www.gisec.ae.

Southern Governor His Highness Shaikh Khalifa bin Ali bin Khalifa Al Khalifa met  through his virtual Majlis with a number of citizens from the...
Sports This Week