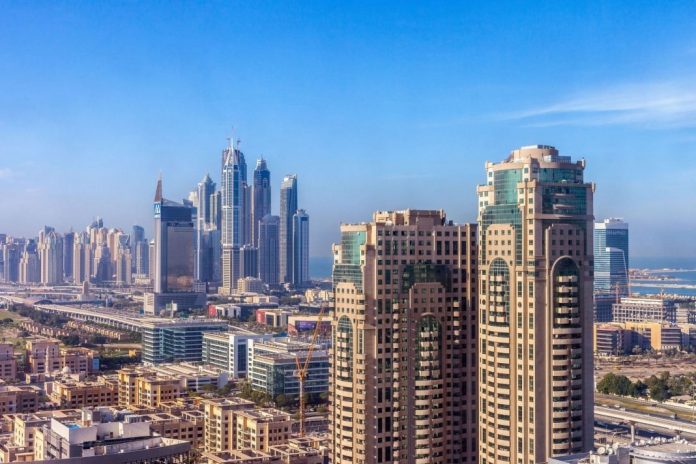 House price growth in Dubai appears to be slowing, with a bottoming out in the market likely to happen at the tail of 2016, according to international real estate consultancy Cluttons.

According to Cluttons’ Dubai 2015/16 Winter Residential Property Market Outlook, values for both apartments (-0.8%) and villas (-0.5%) dipped marginally during Q3, marking the fifth consecutive quarter of price falls. House price declines in the region of 3% to 5% are expected over the next 12 months, impacted by faltering global growth and supply levels creeping upwards. But at the same time infrastructure investments planned around the looming Expo 2020 will boost the rate of job creation and the rate of new households created. 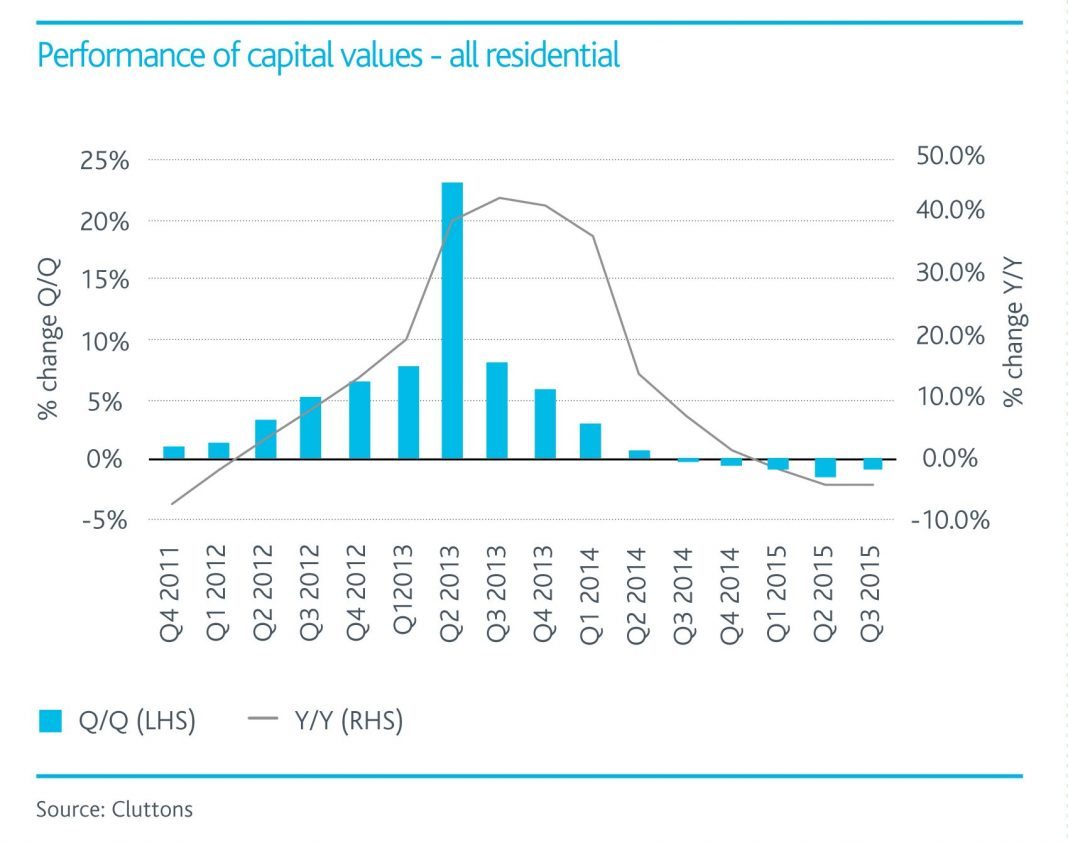 The report highlights that away from the top end of the market, the vast majority of residential submarkets have seen little or no change in values this year. This is partly attributed to the steady appeal of apartments to the buy-to-let investment community and reflected in by the total number of apartment transactions during the first nine months of 2015 being 6.6% higher than the same period in 2014.

Morgan added: “We’ve seen the popularity of off-plan property sales persist, partly fuelled by the fact that off-plan residential property prices are often 20% to 30% lower than completed secondary stock, which in essence might allow buyers to bypass some of the stringent lending criteria and also possibly avoid the need for a mortgage altogether.”

Since the introduction of the Federal Mortgage Caps almost two years ago, the issue of affordability and accessibility to Dubai’s housing market has dominated headlines.

Faisal Durrani, Head of Research at Cluttons, commented: “Several developers have brought schemes to the market that they present as being “affordable”, but true affordable housing remains a vastly underserved segment of the market. The authorities need to formalise the definition of affordable housing, in terms of those who could qualify and the type of housing that needs to be created, otherwise there is a real danger that the term ‘affordable’ will be permanently diluted.” 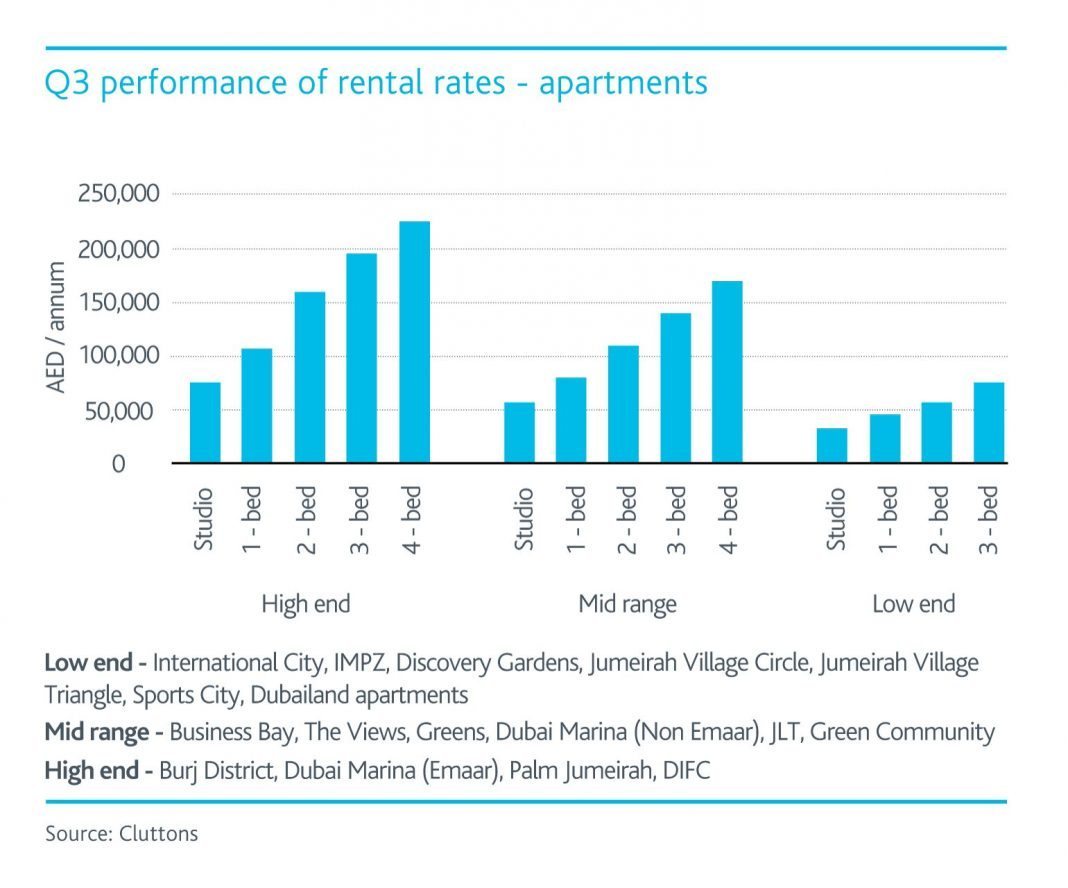 According to analysis carried out by Cluttons on the UAE Ministry of Economy’s 2008 Household Income Survey, average annual expat incomes across the UAE currently stand at around AED 199,000. Average residential rents in Dubai’s freehold areas at the end of Q3 stood at AED 181,000 per annum, highlighting the disparity between incomes and the cost of housing.

According to the Cluttons’ report average mortgage multipliers in the region are around three to four times average income.

Durrani adds: “In the UAE this is approximately AED600,000 to AED800,000, which would typically buy a studio or one bedroom apartment in peripheral submarkets such as International City, IMPZ, Dubailand or Dubai Silicon Oasis, leaving many people little option but to continue renting.  The rent to own model has been successful in the past and has the added advantage of helping developers build an income generating portfolio that could potentially be traded as investment grade stock. Such tenanted asset sales are common in the city’s commercial market, but we are yet to see this in the Dubai’s residential market.”

Tenants can take comfort in the fact that rents have for the most part stabilised, with no growth recorded during Q3. This now leaves average rents across the city’s freehold areas 3.2% down on the same time last year with the biggest declines recorded by low-end three-bedroom villas, encompassing the Springs, Jumeirah Village, Al Reem, Falcon City and The Villa, where rents slipped by nearly 6% between January and September.

The report also references RERA’s rent calculator, which will now be updated on an annual basis, and highlights how it shows signs of being out of sync with market reality.

Durrani said: “It has served as a useful barometer for tenants and landlords since 2009 but the increasingly complex nature of Dubai’s residential market suggest the city may need to find an alternative to maintain transparency and investment volumes into the buy to let sector.”

According to Cluttons’ report, at the opposite end of the market, high end apartments at Dubai Marina (-3%) and apartments on the Palm Jumeirah (-2.5%) have recorded the most significant price decreases during the first nine months of 2015.

Morgan said: “The term luxury is of course very subjective on a global level and compared to other major world cities such as London, Dubai still offers what is perceived to be good value for money, which is aiding the performance of this segment of the market.”

In London’s prime core for instance, the average price of an apartment stands at AED 4.9 million, which equates to between AED 4,500 psf and AED 7,400 psf. The average value of residential property in Dubai stood at AED 1,441 psf at the end of Q3, with the Burj Khalifa (AED 3,700 psf) being amongst the city’s most expensive schemes.