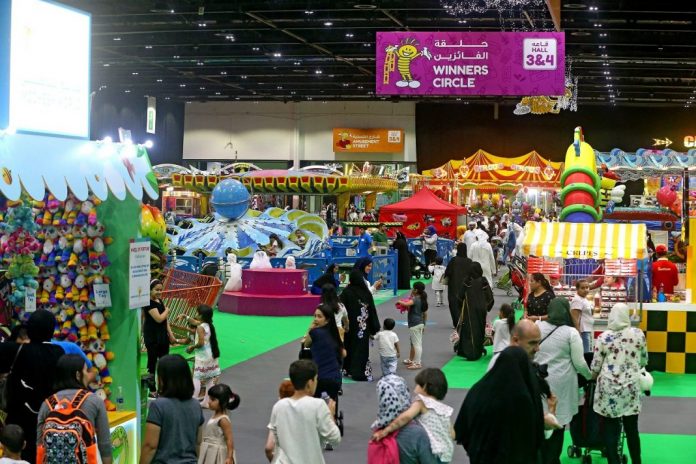 With the hotly-anticipated Dubai Summer Surprises (DSS) starting today, the organisers have released this year’s line-up of events, offering a six-week extravaganza of sales, retail experiences and events that will run until 12 August.

Back for its 20th edition, DSS brings together the best of Dubai’s retail outlets and shines a spotlight on the range of fun-filled attractions and activities on offer throughout the sizzling summer months. From mall events, concerts and character shows, to unbelievable discounts and city wide sales, there’s plenty for everyone to enjoy in Dubai this summer.

Here the organisers give the lowdown on this year’s highlights from across the city.

SHOP ‘TIL YOU DROP

Dubai Summer Surprises will kick off in style with a seismic six weeks of sales, giving customers 30% to 75% off throughout the six-week DSS period.

Top name global brands will be offering knockout discounts, giving customers the chance to get their hands-on belting bargains across Dubai’s malls and shopping areas over the summer.

Shoppers will enjoy mid-week madness with 72 hours of sales from Monday until Wednesday each week during DSS, whilst Friday Surprise will offer people an incredible shopping deal each Friday throughout DSS, starting on 7 July.

Details of the eagerly-anticipated discounts will only be revealed 24 hours beforehand so shoppers are encouraged to keep an eye on the DSS website and social channels to make sure they don’t miss out.

To crown six glorious weeks of sales and promotions, DSS will culminate in the Grand Finale Sale, commencing on 10 August and finishing on 12 August. The Grand Finale Sale will feature the very last price cuts of summer, giving shoppers a final opportunity to snap up the best discounts, before the sales period is over.

Dragon Mart 2 will be offering shoppers who spend AED 200 the chance to win one of three Nissan Patrols, whilst tonnes of small prizes are up for grabs from its ‘Scratch and Win’ instant prize scratch cards.

City Centre Mirdif will offer visitors who spend AED 300 the chance to win a Range Rover Sport 2017 throughout the six-week celebration.

Mercato Mall and Town Centre Jumeirah are giving one coupon to each shopper who spends AED 200 in any shop for a chance to win one of three amazing prizes; a GMC Yukon Denali car, a four-night family trip for four people to Mauritius or jewellery valued at AED 25,000.

City Walk will be putting on an immersive ‘Under the Sea’ show throughout DSS, using LED lights to create stunning light sculptures. To keep little ones happy, there will be a treasure hunt, kids’ passport with rewards and prizes, workshops and live magic shows.

Kids will also enjoy BOXPARK’s popular LEGO activation, which will be back for a third year. Decorated head to toe in brightly-coloured LEGO bricks, the shopping destination will be packed with promotions, prizes and workshops.

Dubai Festival City will be bringing people Dubai’s biggest indoor confetti dome, giving shoppers unlimited chances to grab exciting retailer offers. Participants just need to show their receipts during any weekday to step into this Instagram-worthy giant dome and win big prizes. At Festival Bay, kids will be enchanted by the daily show ‘IMAGINE – A Child’s Dream’, which tells the story of a little boy’s dreams. Following the show, mini shoppers will be able to visit the Dream Station installation to peek into their own dreams.

Ibn Buttatta Mall will be playing host a variety of experiences to wow visitors throughout DSS. From the 27 July, Discovery Channel ‘Discover the Solar System’ will take people on a journey through the cosmos, offering visitors the chance to learn about the solar system in an innovative space zone. Mini space rangers will get the chance to make their own space mobile, plus draw and colour their favourite planets.

Dragon Mart 2 will be inviting shoppers to enjoy a plethora of incredible shows throughout the DSS, including a magical performance of ‘Aladdin and his Wonderous Lamp’ (6 – 15 July) and the ghoulish Ghostbusters (27 July – 5 August).

Under The Tuscan Sun at The Outlet Village will see shoppers invited to enjoy a true Tuscan Summer with a great flowery village environment, kids’ entertainment and exclusive shopping deals.

Mercato Mall has a huge variety of activities happening over the next six weeks including an action-packed Jungle Circus with acrobats in jungle-themed outfits, a circus show with comic acts called Out of the Blues, BMX (bicycle) stunt artists and other amazing performers. Children will have the chance to participate in acrobat workshops and face painting.

Mall of the Emirates from 16 – 22 July will host live gaming sessions and tournaments in partnership with FIFA. Gamers need to spend AED 300 in the mall to get a chance to play which could lead to an international tournament spot.

A raft of concerts is set to take place throughout DSS, bringing popular music acts to the city. On 1 July, the official first day of DSS, Walid Al Shami will perform at Dubai Festival City Mall from 7:45pm.

On 21 July Fouad Abdulwahed and Dalia Mubarak will wow shoppers in City Centre Mirdif. Finally, on 4 August, Balqees will take to the stage at Mall of the Emirates. Both performances will start at 9pm.

All three concerts will be free-to-attend, which is great news for those looking to extend their shopping experience and celebrate their summer in Dubai.

On the 6 and 7 July, Dubai Opera will welcome family concert, Xavier and Aisha’s Amazing Choral Adventure. Coordinated by celebrated composer, Joanna Marsh, Xavier and Aisha’s Amazing Choral Adventure tells the heart-warming tale of Xavier, Aladdin’s little brother, and his quest for true love as he seeks to defeat the evil conductor, learn to sing and marry Aisha, the girl of his dreams.

Throughout the retail and entertainment extravaganza, Dubai World Trade Centre will play host to a range of shows, including Modhesh World, one of the region’s largest indoor family entertainment facilities and Dubai Sports World 2017, the UAE’s largest indoor summer sports venue. Back for its landmark 7th edition, Dubai Sports World 2017 will serve up an action-packed 13-week schedule of sports, tournaments, academies and activities.

Full details of this year’s jam-packed calendar of events can be found on the Dubai Summer Surprises website www.dubaisummersurprises.com or follow @DSSsocial for the latest information.