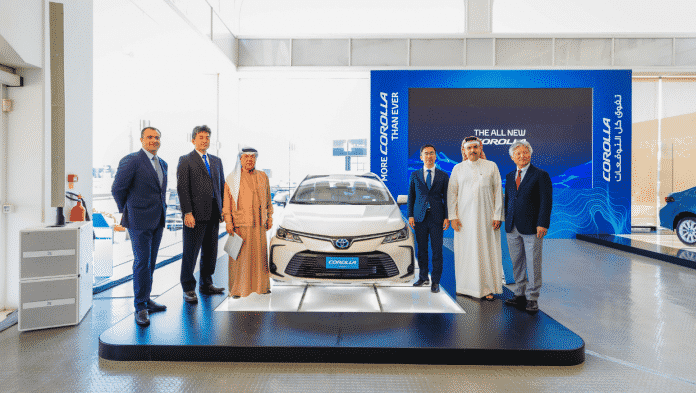 Now available with a hybrid electric powertrain, the 12th generation Corolla ushers in a new era of style, safety, and driving excitement that is set to bring delight to both motorists and passengers in the country.Underlining its commitment to building on the legacy of its innovative vehicles through continual refinements, to meet and exceed the expectations of its customers, the all-new Toyota Corolla was launched by Ebrahim K. Kanoo; the sole distributor of Toyota in Bahrain.

The Corolla is Toyota’s all-time best-selling car series, with more than 46 million cars sold worldwide since the first generation was released in Japan in 1966. With each new generation, the Corolla has evolved; new advanced features and functions have been introduced to suit the needs of the time, all while inheriting the original model’s core DNA―reliability and usability―from the very first generation.

Exemplifying Toyota’s continuous commitment to providing environmentally friendly vehicles is the addition of a hybrid electric model, which combines two power sources consisting of a petrol engine and two electric motors. The class-leading model offers the lowest fuel consumption value in its category at 27.6km/L, enabling customers to contribute to a greener future while enjoying the increased driving satisfaction provided by its advanced technologies. The new model offers exceptional cabin quietness and smooth acceleration, especially when accelerating from a stand-still.

“At Toyota, we strive to design new models that are eye-catching and fun to drive. The Corolla carries a heritage of more than 50 years and has always remained true to its original concept; a passenger car that offers strong levels of quality, durability, and reliability, together with a smooth driving experience. This foundation was our starting point.” stated Chief Engineer for the Toyota Corolla; Yasushi Ueda. “We wanted to make a new model that both builds on this legacy and enriches mobility for our customers. The biggest reward we can get is seeing how people enjoy our car and that they are proud to own a new Corolla.”

Senior Manager of Toyota Marketing at Ebrahim K. Kanoo; Mr. Ayman Shehadeh said, “Few cars truly deserve iconic status like the Toyota Corolla that has built its reputation since it was first launched. Toyota’s New Global Architecture (TNGA) and its commitment to focus on, and continually improve quality, desirability and reliability are clearly evident in this latest Corolla making it one of the most exciting models in our line-up.

We want to thank our loyal customers in Bahrain for their unwavering support and trust in the brand. I have no doubts that the new Corolla will be a success in Bahrain especially with its impressive fuel consumption on both the petrol and hybrid variants.”

The all-new Corolla is built on the Toyota New Global Architecture (TNGA) platform, which guarantees a more rewarding driving experience.
A lower center of gravity, 60% more rigid body shell and multi-link suspension all contribute to better handling and stability, without compromising ride comfort.

The Corolla’s distinct personality is characterised by its expansive and comfortable cabin, which displays exceptional quality and finishing throughout. The interior design adopts a simple yet appealing style, with comfortable spaciousness and integrated functional parts combined to create a refined elegance.

The all-new Corolla’s striking looks are complemented by an exciting drive personality imbued by three powertrain options; these include a newly developed 2.0-liter four-cylinder Dynamic Force engine with a new D-4S fuel injection system, which produces 168 hp and ‎is mated to a new 10-speed Sequential Shiftmatic transmission; and a 1.6-liter four-cylinder engine that produces 121 hp, which is paired with a Multidrive 7S seven-speed automatic transmission. Meanwhile, the new electrified hybrid powertrain combines two power sources consisting of a petrol engine and two electric motors producing 97 hp and 71 hp with a combined power of 121 hp, and an outstanding fuel consumption value of 27.6km/L.

The vehicle can be driven entirely on electrical power with zero-fuel consumption and tailpipe emissions, or by combining the power generated from both the petrol engine and two electric motors, depending on the vehicle’s speed and customer’s driving behavior. Its hybrid electric batteries are continuously charged by either the petrol engine or when decelerating and braking, eliminating the need to plug in a power cord. Furthermore, the hybrid electric model features a host of advanced technologies, yet drives like any other conventional vehicle and does not require special fuel.

Mercedes-Benz has just pulled the wraps off of a wild new concept car that was inspired by the 2009 movie Avatar called — what...
Read more
Wheels and Gears

Bin Hindi Motors, the exclusive distributor of KIA MOTORS in Bahrain recently unveiled the enhanced New 2020 Niro Hybrid in the Kingdom. From every angle,...
Read more
Wheels and Gears

Segway’s newest self-balancing vehicle won’t require you to stand up. Dubbed the S-Pod, the new egg-shaped two-wheeler from Segway-Ninebot is meant to let people...
Read more
Wheels and Gears

Motorcity has unveiled the all-new Tiggo 8 at its showroom in Sanad. The latest addition to the Chery line-up is a 7-seater SUV that...
Read more
Wheels and Gears

Al Haddad Motors have recently held a handover ceremony in which 5 Mercedes-Benz Vito Tourers were delivered to GO Easy Car Rental. Present at the...
Read more

Google is “previewing” a new feature here at CES for the Google Assistant on Android phones that turns it into a supercharged screen reader....
Read more
Uncategorized

In line with the directives of HM King Hamad bin Isa bin Salman Al Khalifa to the government to undertake the development of a...
Yoga