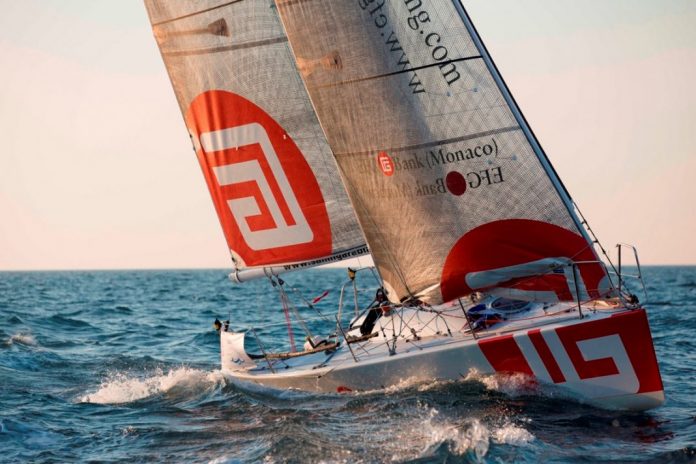 French duo Thierry Douillard and Mathieu Richard will take up the mantle as EFG Sailing Arabia – The Tour favourites for the 2017 title. On board EFG Bank Monaco, they will step in for injured skipper Sidney Gavignet who is three-time winner of the Gulf classic.

Kicking off from 14 February in Muscat, Oman, the two-week exhilarating race challenge will see some of the most difficult routes yet. Beginning from Oman and traveling along the coast to Abu Dhabi, the fleet will then face its longest leg to Doha ahead of the final in-port action in Dubai.

Douillard, who skippered the Diam 24 Oman Airports by Oman Sail to a top 5 place in this year’s Tour de France a la Voile, will be skipper while Richard, one of the most distinguished skippers on the World Match Racing Tour, will take the helm.

Gavignet has been forced to sit out the 2017 race around the Gulf due to surgery on a long-standing knee injury but his Omani protégés Raad Al Hadi and Haitham al Wahaibi, both Oman Sail sailing instructors, will be on board, bringing their local knowledge of the region to bear in their campaign.

The pair recently completed the Dubai to Muscat Race with Oman’s most accomplished offshore sailor Fahad Al Hasni, securing an impressive second place to boost their confidence. Though come February, they will be doing their best to beat Al Hasni who will once again be skippering a rival crew.

“I wish them the best of luck and it is important to keep the same targets as we have always had, which is to win,” said Gavignet. “There is only one goal and they have a good enough crew for that. If they win, it will also be a success for me because it shows we have put together a team that can continue their winning habit without me – this is our long-term objective.”

Also selected in the EFG Bank Monaco crew is Fabian Delahaye, the French navigator who is a specialist in coastal racing with two Tour de France a la Voile campaigns under his belt. This will be his third year on board EFG Bank Monaco.

“We have a strong team again this year,” said Douillard. “Our navigator Fabien Delahaye knows EFG Sailing Arabia – The Tour very well and Mathieu Richard has huge experience on the Farr 30, winning the Tour de France four times with the boat. Raad and Haitham have made big steps in their learning and know the game so we look forward to enjoying the regatta.”

“It is a great honour to be invited to stand in for Sidney and I am very excited to be doing this race,” said Richard. “It is exciting because I have never sailed in these waters – I think it is very different from the French coast – and I have never sailed with this crew, but it is a great crew. They have won it three times and we will start as favourites, so there will be some pressure. We will just have to win!”

The stakes have been raised in the seventh edition of Arabia’s leading offshore race with a new route and new teams, both professional and amateur, and the prospect of a potentially thrilling finale in store.

EFG Sailing Arabia – The Tour 2017, organised by Oman Sail, is now acknowledged as the Middle East’s foremost offshore race and well on its way to being a classic in the international yacht-racing calendar.

A unique annual event, its appeal for seasoned campaigners lies in the opportunity to train and race in the sunshine over the winter months and for less experienced crews, to score points against some of the best offshore sailors in the world in some of the most beautiful waters.

So in February, a fleet of up to 11 Farr 30s will cross the start line in Muscat and head north up the coast to the first stopover at Sohar, having already cast their eye over the opposition in the opening in-port race hosted by Al Mouj in Oman’s capital city.

They will finish 763 miles later in Dubai having completed five offshore legs, via Khasab in the spectacular Musandam Peninsular, the gruelling Straits of Hormuz, Abu Dhabi and Doha notching up crucial points during the in-port races in Doha and Dubai.

Even without Gavignet, EFG Bank Monaco is a formidable team. Once again backed by the event sponsor EFG, who have supported four Sailing Arabia – The Tour campaigns and helped the event earn its status as the most highly regarded sailing event in the region as well as a recognised tourism platform for showcasing the Gulf and its maritime heritage.

Over the next few weeks, the crew on EFG Bank Monaco will find out which other teams from around the world will be joining them on the start line and according to Oman Sail’s event director Salma Al Hashmi, the 2017 event is set to be the biggest and most hotly contested SATT since it started in 2011.

“We are very excited to be rolling out the identities of the crews over the coming weeks and are confident that EFG Sailing Arabia – The Tour’s amazing success will continue to attract new faces and new opportunities in the future,” she said.

“Interest this year has been higher than ever which we believe is down to our commitment to keeping the event fresh and competitive by changing the route and mixing up the challenges. We are constantly seeking feedback from sailors and sponsors to try and get the mix right and this is clearly working to everyone’s advantage.”

EFG Sailing Arabia – the Tour 2017 gets underway at the Al Mouj Marina in Muscat on 14 February 2017 and finishes with a prize-giving celebration in Dubai on 1 March 2017.

Four Square Media & Display Solutions Co brings to Bahrain an immersive experience at The Mall of Dilmunia! Four Square was founded in the year...
Read more
Inside Bahrain

The Bahrain Authority for Culture and Antiquities celebrated the World Tourism Day, Sunday, September 27, 2020, with launching the “Made in Bahrain” initiative, and...
Read more

A number of business owners have extended their appreciation to Batelco for the financial support towards their fixed internet cost for 3 months in...
Read more
Inside Bahrain