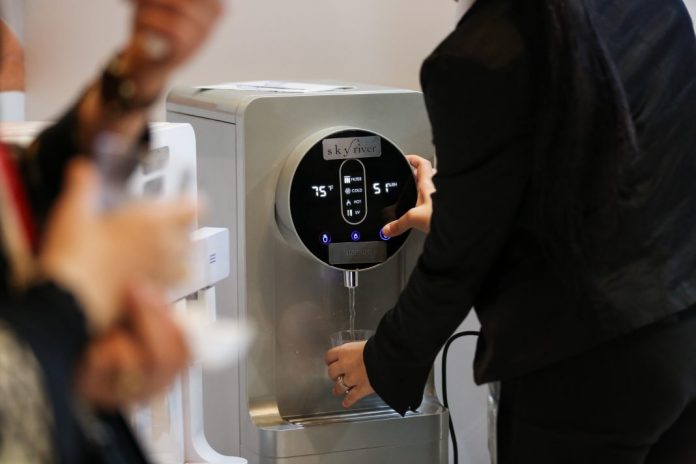 One of the UAE’s biggest banks has signed up with a Dubai SME to provide four-year, interest-free payments for buyers of revolutionary machines which literally convert air into water.

Emirates NBD said the buyer-plan backing is aimed at supporting the UAE’s SME community, particularly those engaged with socially-conscious concerns. “As a business bank, when someone in the local community has a venture such as this, we feel it is our duty to support them and help them grow their business,” said Hussam Al Hashimi, Executive Vice President and Head of Priority Banking and Business Banking.

At Gulfood 2017, the largest in the show’s 22-event history, Sky River has launched its futuristic, game-changing water coolers that capture the air around it before filtering and cooling it into the purest form of drinking water.

With global water shortages well-documented, Sky River CEO, Faheema Mohamed, believes her company has the technology, the will and the way to tackle the issue.

“We have been looking at all kinds of alternatives to tackling the issue of water shortages. This technology has been around in some form for 5,000 years so it got us thinking ‘let’s bring it to this region’,” Mohammed said. “In simple terms, we are harvesting the purest drinking water from thin air. No need for bottles, no plastic, no chemicals. This is water in its purest form. The units designed for homes produce up to 20 litres of water per day, while our biggest units, designed for industrial use, can make up to 10,000 litres of drinking water in 24 hours. And the best part is, the water stays fresh.”

“The filtering system even clears out the ‘bad’ air, so there is no issue with airborne germs – even if people are coughing and sneezing around the machine. You could even have a car engine running next to it and not have to worry,” adds Mohamed.

“Gulfood is now a laboratory window to the food and beverage industry of the future, and the here and now. Visitors come to the show to do business and discover where emerging opportunities lie,” he said.

Sky River’s is exhibiting in a Gulfood pavilion sponsored by Dubai SME – an initiative of Dubai’s Department of Economic Development. The pavilion, which houses 11 Dubai SME members, was designed and built by DXB Live, an off-shoot of DWTC.

Saeed Matar Al Marri, Deputy of the CEO at Dubai SME, said: “Whatever events we are involved in we look for great opportunities for our members, that is our mandate. This is our fourth consecutive year participating at Gulfood and it remains one of the most important exhibitions for us.”

Gulfood 2017 is a strict trade-only event and is open to business and trade visitors. The show is open 11am-7pm from February 26 to March 2 and 11am-5pm on March 2.

The phase III clinical trials are being conducted in the Kingdom in collaboration with Abu-Dhabi based G42 Healthcare using a vaccine developed by Sinopharm...
Read more