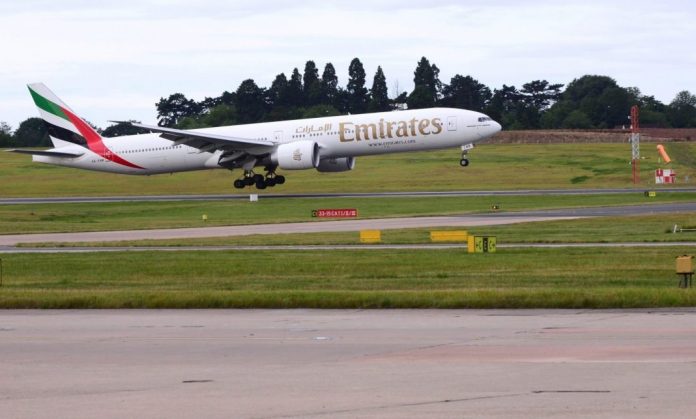 On board the inaugural flight were passengers originating from more than 15 different cities to Birmingham, including Manila, Kuala Lumpur and Bangkok, demonstrating Emirates’ global connectivity. The flight also brought a First Class experience direct to Birmingham in a first for the region.

Laurie Berryman, Emirates’ Vice President UK said: “Birmingham is an important international business hub, and the wider Midlands region is a leading tourist destination. Increasing our capacity in Birmingham will improve the city’s global connectivity and give customers across our network and in the Midlands greater flexibility in their travel plans.

“The introduction of the third daily service to Birmingham is another significant investment in the UK market and we look forward to offering further choice and excellent value for money to travellers and businesses, including the cargo community.”

Paul Kehoe, Chief Executive of Birmingham Airport, said: “This additional service means that passengers have access to more than 1,200 seats daily from Birmingham to Dubai, plus even more choice on Emirates’ network of global connections across the Far East, the Middle East and Australasia. We have seen the route grow from strength to strength over the last one and a half decades due to the enormous demand in the Midlands for long haul connectivity so I thank the Emirates team for their commitment to Birmingham and wish them a happy 15th anniversary for later this year.”

Emirates began their services to Birmingham in December 2000 when it launched the route with a daily non-stop service, operated by a 278-seat Airbus A330. The second daily service was launched in 2005 operated by the same aircraft. Both aircrafts were upgraded to Boeing 777s by 2007 and in 2010, the dedicated Emirates Lounge opened its doors at Birmingham Airport for the first time. In the 15 years since operations at Birmingham Airport began, Emirates has carried almost six million passengers to and from Birmingham – 600,000 in the 2014–15 financial year alone.