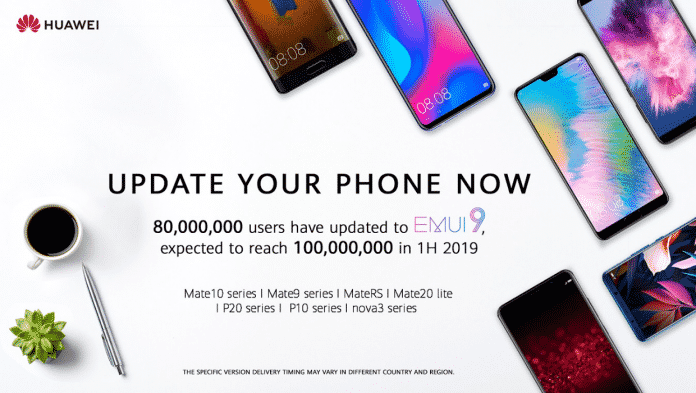 Fulfilling its commitment to continuously upgrade and bring more value to its customers, HUAWEI is making its EMUI 9.0 available for users to download on HUAWEI Mate10 series as well as the P20 series, Mate RS, and Nova3. HUAWEI is also providing previous generation phones with the upgrade, namely the Mate9 series and P10 series and Nova3i which are in the process of continuous upgrades.

According to recent data collected by the smartphone giant, the number of users that have upgraded from the EMUI 8.X, to EMUI 9.0, has exceeded 80 million globally and continues to grow. It is estimated that this figure will reach 100 million by the end of June.

With EMUI 9.0, users of previous generation handsets can now enjoy the exceptional experience provided by the most up to date HUAWEI user interface. EMUI 9 features natural UI, ultra-convenient full-screen gesture navigation, smoother operational experience, and GPU Turbo 2.0 – all of which greatly improves user experience. Configuration items in EMUI 9.0 have been reduced by 10% and the upgrade also allows users of older models like Mate9 and P10 to enjoy a better user experience. The upgrade will bring consistent UI design, natural and immersive UX design, convenient one-hand operation, new gesture navigation, and an overall smoother experience.

For an optimized user experience, the EMUI 9.0 is both faster and more user-friendly than previous versions of EMUI, with a design that reflects natural elements, including natural colors and transitions. HUAWEI has also focused on improving single-handed control, while redesigning and relocating apps like the world clock, photos and Gallery. EMUI 9.0 is designed to be more ergonomic, minimizing the chance of users dropping the device from performing the unnatural finger maneuver. In keeping with the concept of simplicity, Huawei has changed the design of the multi-task interface to make it more visual with a card-type layout to form a unified design. The enhanced layout also includes new gesture navigation capabilities to allow for the full use of the display.

Offering more than pure convenience, EMUI 9.0 also comes with a handful of settings that help users achieve true digital balance. Aimed at those with children or who feel the need to rein in their own usage, the features include screen-time monitoring and app restrictions, and are designed to ensure a healthier relationship between users and their HUAWEI phones.