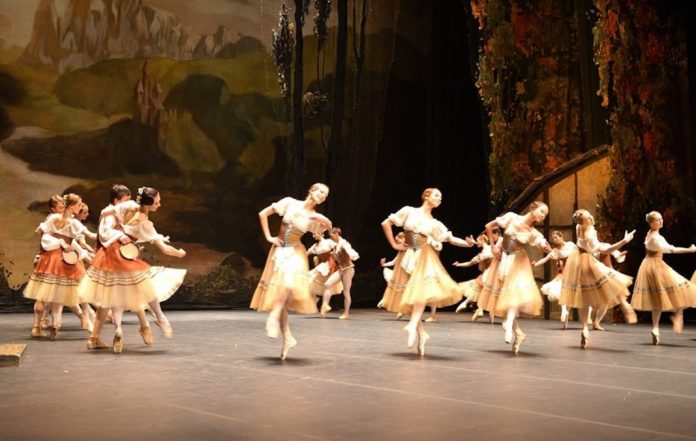 Bahrain witnessed the most gripping ballet called ‘Giselle’ on December 3 at the Bahrain National Theatre. A romantic ballet performed in two acts, Giselle is inspired by ancient Slavic folklore and the work of Victor Hugo. The ballet was written by French dramatists Théophile Gautier and Jules-Henri Saint-Georges, and featured choreography by Jules Perrot and Jean Coralli and musical score by composer Adolphe Adam. Interestingly, Giselle has a memorable history to boast of.
First performed in Paris in 1841, the show became a runaway success. The traditional choreography that has been passed down to the present day derives primarily from the revivals staged by Marius Petipa during the late 19th century. Enthralling a full-house audience here in Bahrain, the recent show starred Anna Nikulina and Alexander Volchkov, principal
dancers of the Bolshoi Theater, in the lead roles of Giselle and Albrecht, respectively. Interwoven with elements of fantasy, the story depicted the tale of a peasant girl named Giselle who died of a broken heart after discovering that her one true love Albrecht is betrothed to another woman. The Wilis—mythological women who dance men to death in Slavic folklore—summoned Giselle from her grave and targetted her lover to death, but her love frees him from their grasp. A packed audience at the Bahrain National Theatre was mesmerized by this performance! ‘It is a beautiful ballet on love that takes us audience to a different level of perception of the emotion’, said a young man to BTW. Hope Bahrain witnesses more such soul stirring ballet performances in the near future!

McLaren Automotive will bring the full force of its expertise in hybrid powertrain engineering to the supercar class next year with the introduction of...
Read more
PR This Week

In line with the Kingdom’s national efforts to limit the spread of infectious diseases, medical check-ups will be mandatory for employees in industrial and...
Read more

Bahrain Tourism and Exhibitions Authority (BTEA) urged all hotels and hospitality facilities to adhere to the instructions stated in the ministerial edicts issued by...
Sports This Week

Bahrain’s National Broadband Network (BNET), launched in October 2019 and responsible for providing broadband network services across the Kingdom of Bahrain, has opened its...
Wheels and Gears

The new 2021 Lexus IS was unveiled today by Ebrahim K. Kanoo via a unique and engaging virtual reveal at the Lexus showroom in...
PR This Week

KBC Bank, a Belgium-based bank with operations across Europe, US and Asia Pacific, has chosen Finastra to help manage its transition through the upcoming...
Inside Bahrain

Reflection is an activity that is quite commonly used in coaching. There are several ways to do it, I came across this technique which...
PR This Week