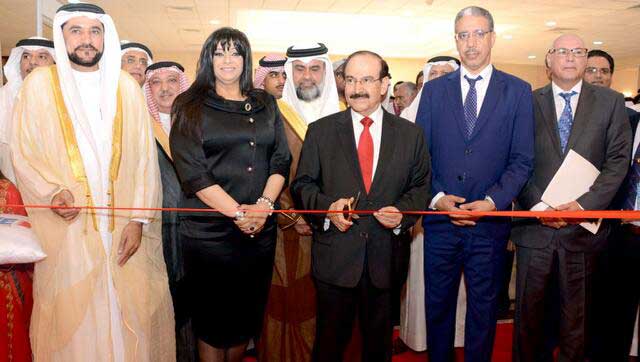 Electricity and Water Affairs Minister Dr. Abdul Hussain bin Ali Mirza inaugurated the first Energy Investment Forum and its associated exhibition STEEB2017. The event , held at Bahrain International Exhibition and Convention Centre, is organised by AGE company in cooperation with Tamkeen and was attended by Moroccan Minister of Energy, Mines, Water and Sustainable Development Aziz Rebbah alongside an elite of officials and experts from the renewable energy field, investment companies and manufacturing companies of this technology.

In his keynote speech, Dr. Mirza thanked the leadership for their support to such events, lauding contribution of ministries and government bodies to enable the owners of small and medium enterprises to learn about solar energy. He added that the Bahraini government set up the Sustainable Energy Unit in 2014 which asserts resolve to diversify energy sources in Bahrain and the GCC countries. He outlined the unit’s achievements, pointing out the benefits to be drawn from renewable energy.

Eng. Amira Al Hasan, CEO of Arab Gate Expos. told BTW, ” The philosophy of the big countries in the success of the conference industry lies in providing the real support emanating from the strategic vision of the state to achieve the desired goals in the community development. The conferences are not the welfare of the people; it is a scientific philosophy in which the state achieves its visions; and develops the fertile investment environment for sustainable development.”

“This forum is an activation of the permanent partnership and national responsibility in the development of the business sector, which is a significant part of the economic development on one hand, and the national companies in supporting the entrepreneurs to achieve the desired economic development that the Kingdom of Bahrain seeks to translate into a desired reality through the application of Economic Vision 2030 with the Tamkeen Labor Fund on the other hand.”

“The Kingdom of Bahrain has played a leading role since ancient times as a maritime resource that has contributed for many years to the economic prosperity and commercial recovery of all the GCC countries. Bahrain has been an important source of culture and development and has played a pivotal role in spreading science and Arabic culture. Bahrain has also played a leading role in the economic development through the establishment of many large industrial companies such as Alba, Bahrain National Gas Company, Bapco and GPIC, which contributed to an unprecedented economic boom.”

“The first International Energy Investment Forum, which opens the door of renewable energy investments in Bahrain, which will constitute a quantum leap in commercial and household use as it comes to meet the aspirations of the wise political leadership in providing safe life with the least economic cost to the citizen,” Amira added.

The Artificial Intelligence (AI) Academy of the Bahrain Technical College (Bahrain Polytechnic) launched the first batch of 38 students. This came under the directives of...
Read more
Inside Bahrain

Southern Governor His Highness Shaikh Khalifa bin Ali bin Khalifa Al Khalifa met  through his virtual Majlis with a number of citizens from the...
Management Principles