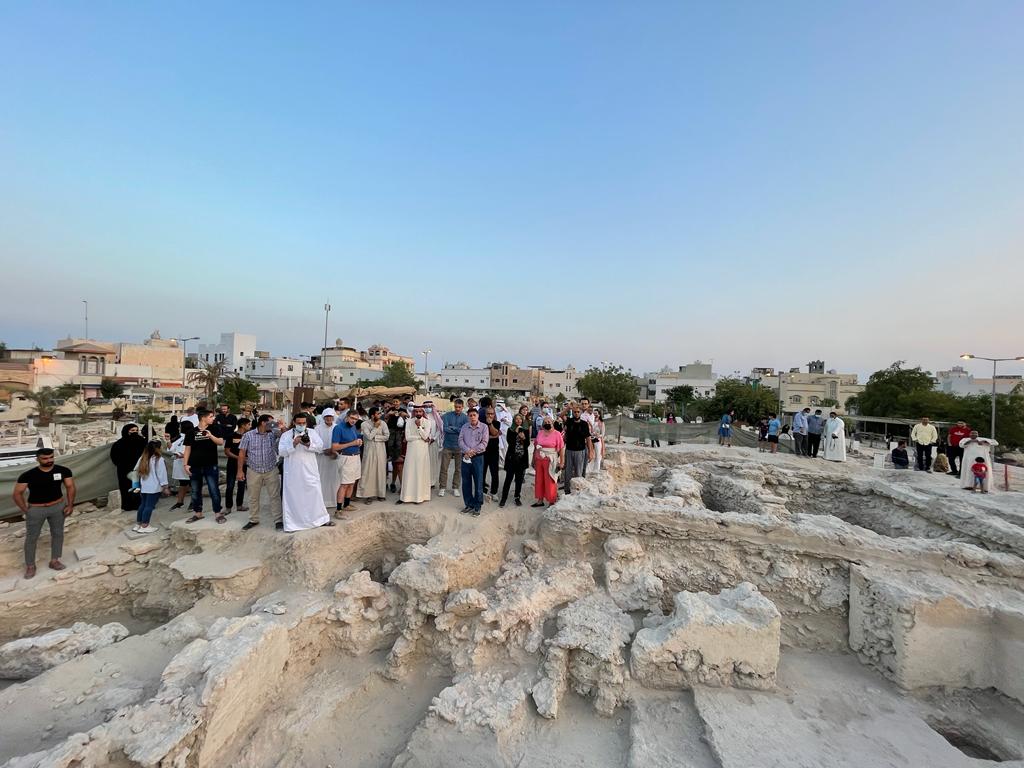 An international team of archaeologists excavating at Samahij village and in Muharraq town has recently made some exciting discoveries. Led by Professor Tim Insoll and Dr. Rachel MacLean of the University of Exeter, UK, they have been working with their colleagues from the Bahrain Authority for Culture and Antiquities, led by Dr. Salman Almahari, Director of Archaeology and Museums, continuing a partnership that has successfully run for a number of years.

In Samahij the team has been continuing excavations started in 2019 of an early Christian site, the first to be found in Bahrain, which dates from the sixth century CE. This year they have found out more about the building and have identified the kitchen area, the communal dining hall, a workroom, and 2 living rooms. The living rooms were originally decorated with finely carved plaster and show that the building was the home of someone of wealth and importance – possibly even the Bishop of Meshmahig (now Samahij). Evidence for a Christian diet was uncovered this year when a pig jawbone was found in the building. In the workroom 3 beautiful spindle whorls (for spinning thread), made from glass, alabaster, and ivory, were found near to 3 bronze needles, suggesting that needlework had been an important activity. Finally, a favorite find for the team this year was an oyster shell that had been shaped and painted with a face!

The work in Muharraq town proved equally lucky. Here the team has been looking for the earliest Islamic settlement (Umayyad) on the island, which lies over 3 meters below the ground surface. This year they were successful and found a very large storage jar, nearly a meter in diameter, dating from this period and set into a paved floor. It was so large that it took 2 days to remove it safely and take it to the museum. This is the most complete example of such a storage jar ever found. It appears that early Christians may also have been living in this part of Muharraq too, not just at Samahij, as the team also uncovered a tiny bone or ivory cross. A second very exciting pot was also found here. Sealed with a pot lid and oyster shell, and possibly hidden in the 16-17 century when Bahrain was a more turbulent place, this pot appears to be full of small coins wrapped in textiles – actual buried treasure! It is in the process of being CT scanned to examine its contents safely before conservation, more ground-breaking work for Bahrain as this is the first time such a scientific process has been used for archaeology in the country.

To find out more information about this treasure, it was examined using a computerized tomography (CT scan) scan, in cooperation with Salmaniya Medical Complex, whose medical and administrative staff showed interest and cooperation to implement this pioneering step for Bahrain, as this is the first time that such a scientific technology has been used for archaeology in the country. The examination revealed the bad condition of the pot, which required careful restoration, and showed that the pot was filled with small coins and some large coins at the bottom.