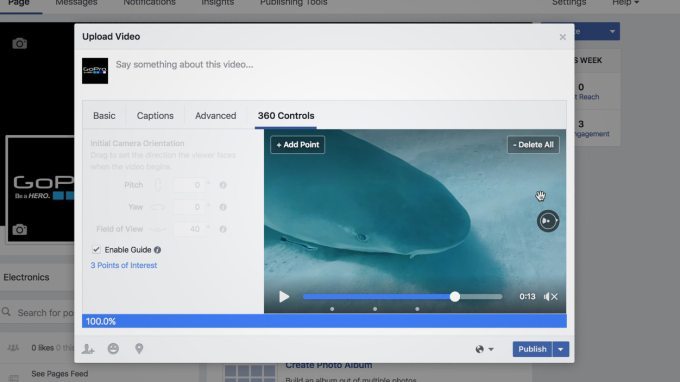 Facebook has to train people how to make great video if it wants it “at the heart” of its services like Mark Zuckerberg promised, so it launched a slew of new video analytics. Creators can now see the audience demographics of their video viewers, what moments were most engaging in their live broadcasts, and how shares and cross-posts boosted their view counts.

But more interesting is the pioneering work Facebook is doing around bringing narrative to the 360 video experience. In the 250,000 360 videos uploaded to Facebook so far, viewers always had to choose for themselves where to look, but creators couldn’t tell what angles were the most eye-catching. Two new features fix that.

Guide lets 360 video makers set a default path for the viewing window to move through in order to create a lean-back experience. When uploading a 360 video, the new 360 Controls tab lets producers “Enable Guide” and then select points in the video they want people to see. When users watch, the viewing window will default to automatically move around the 360 video sphere and focus on the selected spots.

This way, creators can tell a story without worrying that viewers will miss the important parts, like “a diver plunging into the water or a shark swimming up behind them”, Facebook writes. And viewers can swipe out of the Guide to choose where they look, and tap the Guide button again to return to the director’s track.

You can see the 360 Guide in action on these videos, including the New York Times’recording of Usain Bolt’s world record 100 meter sprint, and ABC News’ cruise through New York Harbor

Heatmap allows video creators to see where people looked inside their 360 video. A visual map shows the most viewed angles by measuring whenever viewers moves more than 30 degrees.

Heatmap will be available on all videos with over 50,000 unique viewers from late-April onward, and can be found in the Video Library’s Publishing Tools for each video. Creators can use Heatmap to inform what points of a video they want in their Guide

Facebook is building a bigger and bigger lead in 360 social video by developing these technologies. While YouTube also has 360 playback, Twitter and Snapchat lack it. Zuckerberg has repeatedly said he sees Facebook evolving from text and photos to videos and 360 content. But with any new medium, creators are still figuring out what works. These new analytics could push 360 video from the “Train Pulling Into The Station” demo phase into an age of real artistry.

In line with its strategic corporate initiative, stc Bahrain is launching the third edition of its ‘Arts and Culture’ platform – a community engagement...
Read more
PR This Week

The Indian Community Relief Fund (ICRF), working under the patronage of the Embassy of India in Bahrain, reaches out to the distressed members in...
Wheels and Gears

Google is expanding the ways you can make video calls on smart displays powered by Google Assistant with new support for group calling in...
Inside Bahrain

With restrictions around the world beginning to ease, it is important to check the validity of your passport in case you need to make...
Inside Bahrain

Within the framework of its promotional efforts for the Kingdom of Bahrain as leading and distinguished tourist destination and of increasing the number of...
Entrepreneurial Journey

Gulf Air, the national carrier of the Kingdom of Bahrain, will resume its direct Athens and Cairo flights with scheduled operations starting from 01...
© GO ALIVE MEDIA
MORE STORIES