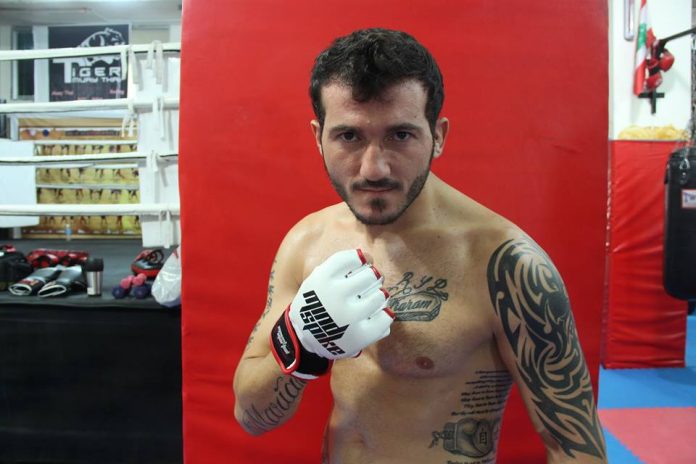 January 24, 2017
Facebook
Twitter
Pinterest
WhatsApp
Linkedin
Mohamed Fakhreddine is fully recovered and ready to make his Brave Combat Federation debut after all. Originally scheduled to fight at Brave 1 back in October 2016, injury struck Fakhreddine forcing him to pull out from the main event.
The Lebanese/American mixed martial artist stated that he is fully recovered and looking to fight sometime in March. Just a month after undergoing surgery, it appears he is in great spirits and good health… and ready to rock.
“I had a great recovery,” said Fakhreddine. “This time off was super important to me. I was so busy with other projects and rehab that I didn’t even notice how fast this recovery was. It was really uncomfortable three or four days after the surgery, but after that I was pretty much in good hands, thanks to Dr. Tareq Gherbal.”

With two brave events being scheduled this March, Fakhreddine made it clear. He will not be part of Brave 3 which is happening in Curitiba, Brazil. It is most likely that Fakhreddine will take part of Brave 4 fight card which will take place in Abu Dhabi.
“It would have been great to compete in Brazil, while i prefer taking it slowly but surely. I have informed Alex Soto of my health status and mentioned that I will be ready for Abu Dhabi. Nothing is officially discussed yet. I am looking to take part of that card and fight for the welterweight title!”
A super stacked welterweight division is building up at Brave Combat Federation. With Vieira being annihilated, followed by Gaziev, everyone seems to be eyeing Carl Booth right now.

Let’s wait and see what Nassar and Hernandez are cooking for us. These guys might not be the best cooks but they sure  can puzzle a legitimately strong fight card.
Brave Combat Federation was born in Bahrain, at the heart of the Middle East, as a truly global Mixed Martial Arts Promotion. It was founded under the patronage of His Highness Sheikh Khalid Bin Hamad Al Khalifa. Brave`s goal is to unite the world through the sports of Mixed Martial Arts, giving people the chance to expose and value their own culture but, at the same time, to experience others. Brave is about testing your skills, pushing yourself to your limits, and compete at the highest level. Above all, Brave is about people, and how they’re writing history and building a legacy in the Middle East.
Make sure to stay tuned to Brave Social Media @BraveMMAF.
Facebook
Twitter
Pinterest
WhatsApp
Linkedin
Previous articleDubai Properties delivers over 3000 units in 2016
Next article‘Taste Tour’ Witnesses High Turnout