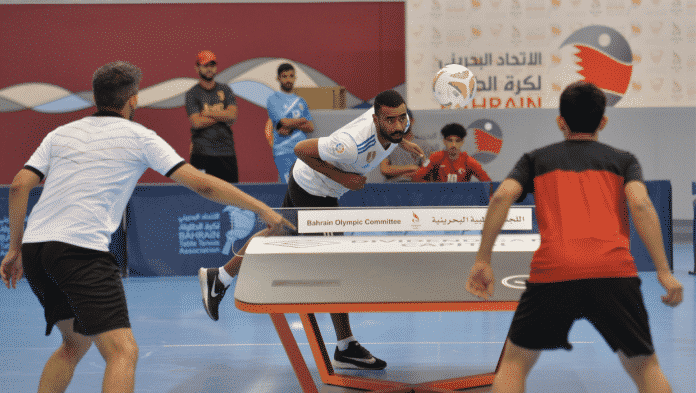 Rashid Jamal and Salman Saad were crowned champions of the first-ever Teqball Championship.

Sixty four players, making up 32 pairs, competed at this day-long tournament, which eventually was won by the tandem of Jamal and Saad, who secured the title after a 2-0 win over the team of Abdulla Ali and Hamed Abdulla, who settled for the silver.

The pair of Mohammed Al Ghenaim and Sayed Fadel Radi took the bronze, thanks to their 2-1 win over Ali Al Nusuf and Isa Al Absi in the third-place tie.

It was a joyful gathering for some of Bahrain’s elite football players as they competed in this first-of-its-kind sport introduced to Bahrain recently.

Four sports can be played on the Teqball ONE and Teqball SMART tables: teqtennis, teqpong, qatch and teqvolley. With these versatile ways of sporting and working-out, everyone can find the ideal sports activity independently of their age, sex and physical abilities We are absolutely convinced that all family members would soon discover the pleasures of sport on the Teqball table.

Teqball is a new sports equipment, which is perfectly suitable for professional footballers as well as amateur enthusiasts whose ambition is to develop their technical skills, concentration and stamina.

The sport, run by Fédération Internationale de Teqball and is based in Switzerland, has been attracting some of the world’s best football players from the English Premier League as well as from France, Germany, Hungary and Brazil..

It received recognition of the Olympic Council of Asia during the general assembly meeting held in Indonesia at the 2018 Jakarta Asiad.

The Bahrain Handball Association (BHA) organised a webinar which focused on local competitions for the current season. Heads and representatives of member clubs also took...
Read more
Sports This Week

The Asian Football Confederation (AFC) has announced Bahrain as hosts of the 2020 AFC Cup West Zone matches in Groups A. AFC has also confirmed...
Read more
Sports This Week

Zain Bahrain, a leading telecommunications provider in the Kingdom virtually hosted the 4th edition of ‘Zainnovate’ in partnership with Alkeri Partners, a Bahrain based...
PR This Week