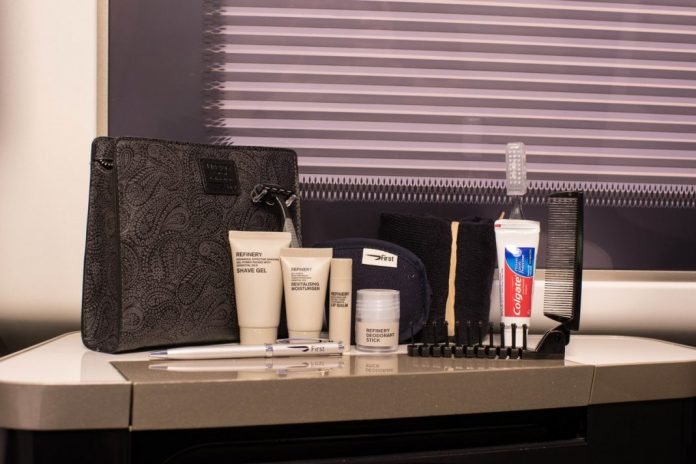 FIRST IS FLYING WITH BRITISH AIRWAYS

That’s around 1,800 customers a day transferring through The First Wing from check-in to the lounge. The smoothness and convenience of the innovation has resulted in great customer feedback and has also reduced the number of customers travelling through the normal security search areas, delivering a benefit for all fliers.

The airline is continuing to invest in other improvements to First, including a refresh of its flagship Concorde Room at Heathrow Terminal 5 to be unveiled in October 2017. The lounge, which is exclusively for First customers will receive an updated look and feel, as well as improvements to the terrace area.

Additionally new Liberty London washbags will take to the skies at the end of July. The kits feature prints from Liberty’s vintage textile archive. The ladies’ version features an eye-catching print called ‘Indiana’ flower pattern in a range of blues, while the male washbag showcases a more understated black and grey paisley design called ‘Arundel’.

Alex Cruz, British Airways’ chairman and CEO, said: “We know that our First customers are used to the very best in life and have very exacting standards. They rightly expect every part of their journey with us to cater to their needs, so we’ve focused on areas that we know matter to them. First Wing enables them to maximise their time, whisking from kerb to lounge through the fast track security channel. And we’ve paid attention to the details that make a difference on board too, through elements such as the updated Liberty washbags and the ability to pre-order a preferred meal.

“From the feedback we’ve received from our First fliers, these changes are making a real difference to their experience, driving great customer reaction and there’s more to come with the revamped Concorde Room at Terminal 5, due to be unveiled this October.”

The airline’s customers that book 60 days in advance can fly First for as little as BHD 2,665 and experience the new First Wing in Heathrow, Terminal 5. For further information on First customers can visit ba.com/first

The Kingdom of Saudi Arabia’s leadership and people celebrated, the 90th National Day of Saudi Arabia, on September 23rd, after the historical announcement of...
Read more
Tech