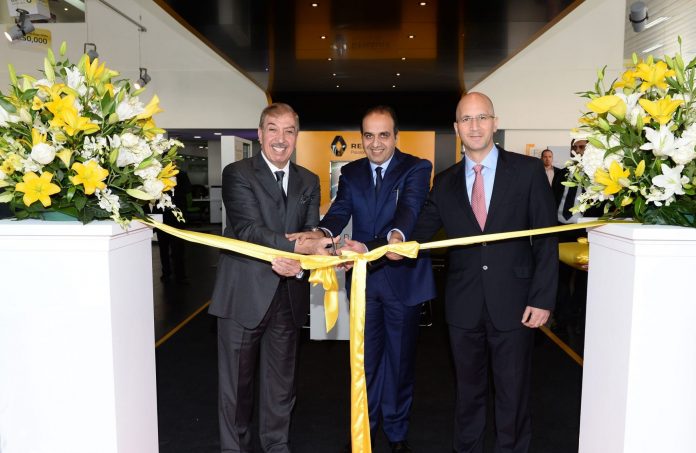 Arabian Automobiles Company, the flagship automotive division of AW Rostamani Group and exclusive dealer for Renault in Dubai and the Northern Emirates, has opened its first ever Renault Store in the UAE. The launch event for the dedicated new facility, which is located on Al Ittihad Road, Dubai, was attended by Michel Ayat, CEO of Arabian Automobiles Company and Hakim Boutehra, Managing Director, Renault Middle East.

“Arabian Automobiles Company is proud to have played a major part in Renault’s ongoing success story through its position as the sole distributor for Renault vehicles in Dubai and the Northern Emirates. We are delighted to be able to take the company’s services to an even higher level with the inauguration of this new state-of-the-art Renault Store – the first such facility in the country and one introduced to maximise the customer experience and to showcase Renault’s winning attributes,” said Michel Ayat, CEO of Arabian Automobiles Company.

The Renault Store has been introduced to both capitalise on and to facilitate the continued expansion of the Renault brand. The new showroom has been styled to embody Renault’s new brand slogan: ‘Passion for life’ and has been ergonomically designed to ensure optimum customer engagement through a wealth of engaging features.

The Renault Store aims to transform the way customers experience the dealership network through a series of new visual space identity concepts, from its showroom through to its aftersales facilities. Pride of place is a number of Discovery Zones that have been designed to group the brand’s many winning facets under dedicated themes. The Headline Zone highlights the company’s most recent models, while the Passion Zone displays Renault vehicles of desire in a setting that emphasises the brand image. The Z.E. Zone reveals Renault’s fully electric range of vehicles and the Sport Zone showcases the company’s impressive motorsports pedigree and its range of performance vehicles.

Making use of the latest technology at the Renault Store is a Digital Bar, where customers can experience the brand while they relax and enjoy a coffee. A Brand Wall screens a video of Renault’s history and its array of achievements through the years, while a Car Configurator helps customers easily see how they can personalise the look of their selected model. The centre’s aftersales facility ‘Renault Service’ has been configured to offer peace of mind and time savings by taking care of everything through specific receiving zones and a ‘quick service’ pit-drop concept.

Managing Director, Renault Middle East, Mr. Hakim Boutehra stated: “The inauguration of the Renault Store represents a significant milestone for Arabian Automobiles Company and Renault. The Renault brand is growing day-by-day thanks to leading partners such as AW Rostamani Group, who make major investments to sustain our tremendous expansion in the UAE. The Renault Store has been designed to better meet customer expectations by providing a personalised welcome and the ability to see and touch the cars, view the colours and materials, book test drives, avail trade-in offers and  ̶  above all  ̶  to enhance the quality of relations with the sales persons and service advisors. With the Renault Store, we are delivering a unique experience through an outlet that is modern, friendly and dynamic. By 2017, all our showrooms in the Arabian Gulf will bear the colours of Renault Store. These new facilities will offer the very best customer service experience.”

Arabian Automobiles Company is expecting its new Renault Store to build on its already incredible levels of growth. Renault sales for Dubai and the Northern Emirates increased nearly 22% for last year over 2014, making it one of the fastest growing automotive brands in the region. Renault was one of the main drivers of the region’s automotive sector in 2015, which recorded an increase of 3.2% in total vehicle sales. Renault aims to further its expansion in 2016 with a number of initiatives that include the launch of the much anticipated new Renault Talisman and Koleos models.

Arabian Automobiles Company (AAC) is the flagship company of AW Rostamani Group. With over 45 years in business, AAC is one of the leading automotive dealers in the GCC and exclusive distributor for Nissan, Infiniti and Renault vehicles in Dubai and Northern Emirates.

AAC is currently holder of Nissan Motor Company’s Global Aftersales Grand Prize award and is the only Nissan distributor worldwide to have won the award six years running.  In 2012, Arabian Automobiles was awarded the ‘Champion Distributor’ status by Nissan Motor Company for the third consecutive year and ‘Champion Importer’ for Renault in 2012. Arabian Automobiles was also awarded ‘Dealer of the year’ for Renault two consecutive years in 2011 and 2012. In 2013, Arabian Automobiles became the first private United Arab Emirates Company to enter the prestigious Palladium Balanced ScoreCard Hall of Fame for strategy excellence.

Across its Dubai and Northern Emirates network, Arabian Automobiles operates:

Zain Bahrain, a leading telecommunications operator in the Kingdom of Bahrain, fuelled by the passion to empower Bahraini youth with specific skills, recently announced...
Spotlight