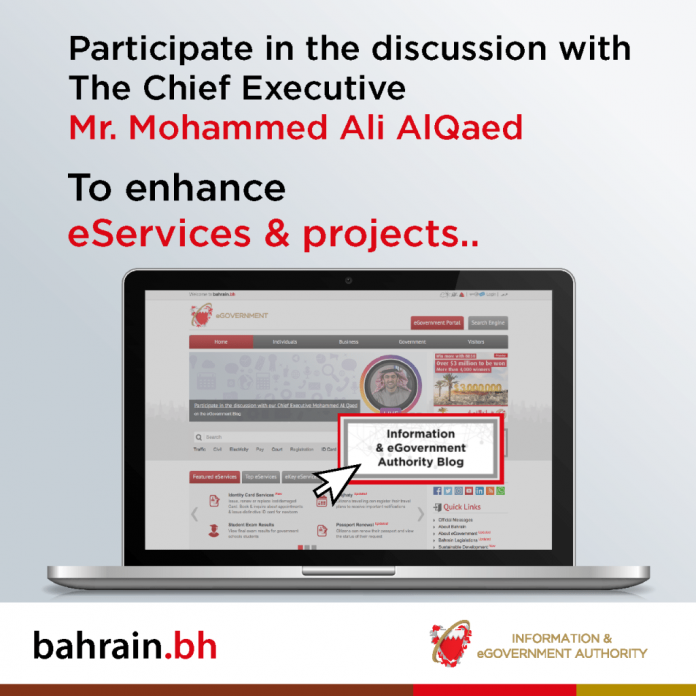 For the 1st time in Bahrain, IGA on InstaLive

Keeping with the latest social media trends; the Chief Executive of the Information & eGovernment Authority (iGA) Mr. Mohamed Ali AlQaed had directly interacted with the public through the live broadcast via InstaLive on Instagram. Responding spontaneously and directly with the public via social media is a step bringing the first government entity in the Kingdom to enhance direct eParticipation with government officials. Authority’s Instagram account (@iGABahrain) followers were able to comment, question and suggest directly with the Chief Executive on 6th August, 2017 to discuss the topic ‘eServices & eTransformation Projects during 2017’.

Aiming to raise awareness on the eServices provided by the authority and ease their utilization on beneficiaries; users may continue to post their comments on the eTransformation projects and the eGovernment Program implemented by iGA and other involved governmental entities as the blog will continue to be active to receive more participations for its duration of two weeks – up until 21st August 2017. And interactions will be directly responded to by the Chief Executive.

Citizens and residents’ questions and feedbacks will be archived and published via the eGovernment Blogs page on the National eGovernment Portal (Bahrain.bh) to become permanently available for all who wish to benefit but was unable to participate. Also, the InstaLive interaction, which took place on the launch of the Blog, was recorded and posted on the blog for viewers who missed the live interaction – giving them an opportunity to still participate in the traditional blog. This blog will join the other 13 blogs, launched since 2009, by a group of government officials – participated to represent several country sectors.

iGA takes opinions and suggestions of the public in consideration and adopts this new communication mechanism which comes with the current trends of utilizing social media that has today become an arena available for everyone to share their ideas, events and updates. Such type of eParticipation is not only a platform and a mean to develop services according to requirements and needs of the public but also improves Bahrain’s rank in the United Nations eGovernment Survey as it reflects the direct communication amongst officials and the people.

Seeing the positive and beneficial impact of the InstaLive broadcast, government entities are urged to initiate communication via this mechanism as it will certainly improve citizen’s trust in the government entities, officials and delivered services. iGA is prepared to activate such initiative with entities’ senior official heads who desire to directly interact with the citizens and residents of Bahrain.

To take part in the blog, please visit Bahrain.bh; and to view the InstaLive interaction, please visit our social media accounts @iGAbahrain.