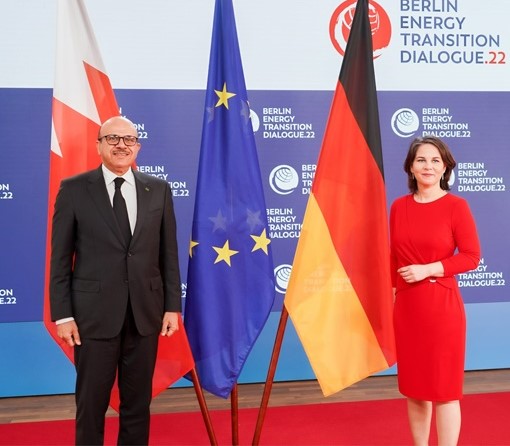 Dr. Al Zayani expressed his thanks and appreciation to his counterpart for her kind invitation to participate in this significant international conference hosted by Germany at a time when the issue of energy is a global priority due to its impact on the global economy, environment, climate and sustainable development.

The  German Minister welcomed the visit of Dr. Al Zayani    and his participation in the conference, praising the growing joint cooperation between the two friendly countries.

She stressed her country’s interest in developing bilateral cooperation, continuing communication and joint coordination on issues related to maintaining security, and commended the efforts of the Kingdom of Bahrain and its keenness to move forward to promote peace, stability and prosperity in the Middle East, wishing Bahrain continued progress and development.

They reviewed developments in the regional and international political and security situations, in addition to a number of issues and issues of common interest.

The meeting was attended by the Ambassador of the Kingdom of Bahrain to Germany Abdullah Abdullatif Abdullah, and the minister’s accompanying delegation.