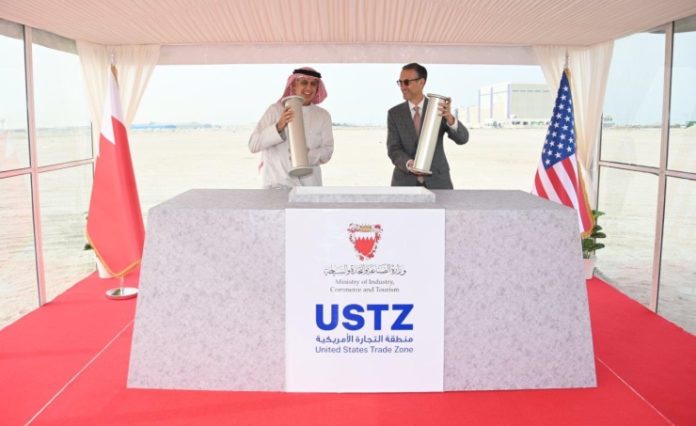 The foundation stone was laid for the United States  Trade Zone (USTZ)  at the Salman Industrial City.

The ceremony was attended by the Minister of Industry, Commerce, and Tourism Zayed bin Rashid Al Zayani, US Ambassador to the Kingdom of Bahrain Steven C. Bondy, members of the Bahrain Logistics Council, and senior officials.

The USTZ project follows the visit of His Royal Highness Prince Salman bin Hamad Al Khalifa, the Crown Prince and Prime Minister to the USA in November 2019.

A memorandum of understanding was signing in 2021, establishing the trade zone which will contribute to boosting economic, commercial, and industrial cooperation and support bilateral trade exchanges.

The American Trade Zone is part of the investment and strategic projects package announced in the Industry Sector Strategy (2022-2026), which comes within the economic recovery plan, with an area of approximately 110,000 square meters, which amounts to 1.11 million square meters with future expansion.

Bahrain and the USA will start promoting the zone as a regional center for trade, manufacturing, logistics and distribution among American companies in the Kingdom and GCC markets beyond.

“The availability of economic opportunities in the region is an ideal opportunity for American companies to invest and expand their business through the American trade zone in Bahrain”, said the minister.

He said that the project would usher in broader prospects for joint commercial relations between the two countries in accordance with the advantages of the free trade agreement.

He pointed out that the inauguration of the hub reflects the ministry’s  commitment to achieving the visions of the wise leadership in implementing the goals and initiatives that have been set in order to fulfill the desired recovery of the economy.

- Advertisement -
Facebook
Twitter
Pinterest
WhatsApp
Linkedin
Previous article“Food is Culture 7” returns to bridge the culinary and visual arts
Next articleMinister of Industry, Commerce and Tourism meets with BTECH Board