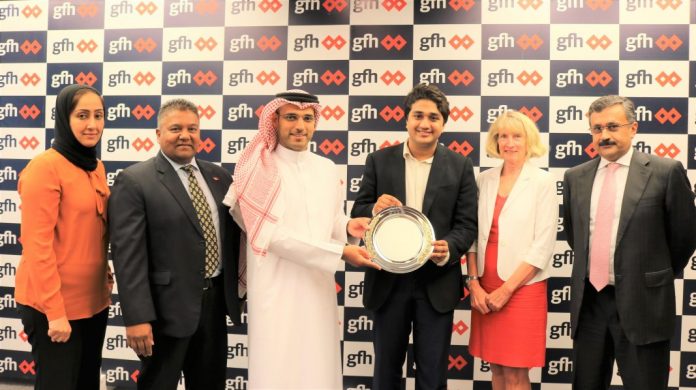 GFH Financial Group BSC (“GFH”) today awarded one of British School of Bahrain’s top students with the GFH “Academic Performance Award”.  The highest A-level results achiever for the academic year 2016-2017 is “Sa’ad Naeem Ullah Khan” who has been accepted at Oxford University in the UK, where he is set to enroll as a student in October 2017.

The award was presented to Sa’ad Naeem Ullah Khan by Mr. Hisham Al Rayes, CEO of GFH Financial Group, the owners of the British School Bahrain.

Commenting on his award, Sa’ad Naeem Ullah Khan, said, “I would like to thank GFH for providing me such great award and for its keenness to encourage outstanding students. Also, i thank my teachers, especially Mrs. Milles, for their support in helping me to achieve these results.  I will always remember my experience at British School of Bahrain and will miss all my friends.”

British School of Bahrain continues to rank among the top K-12 institutions in the Kingdom of Bahrain and the GCC region.  Year after year, the school delivers outstanding examination results at A level, BTEC and GCSE in line with its mission and dedication to academic excellence, responsibility and individuality.