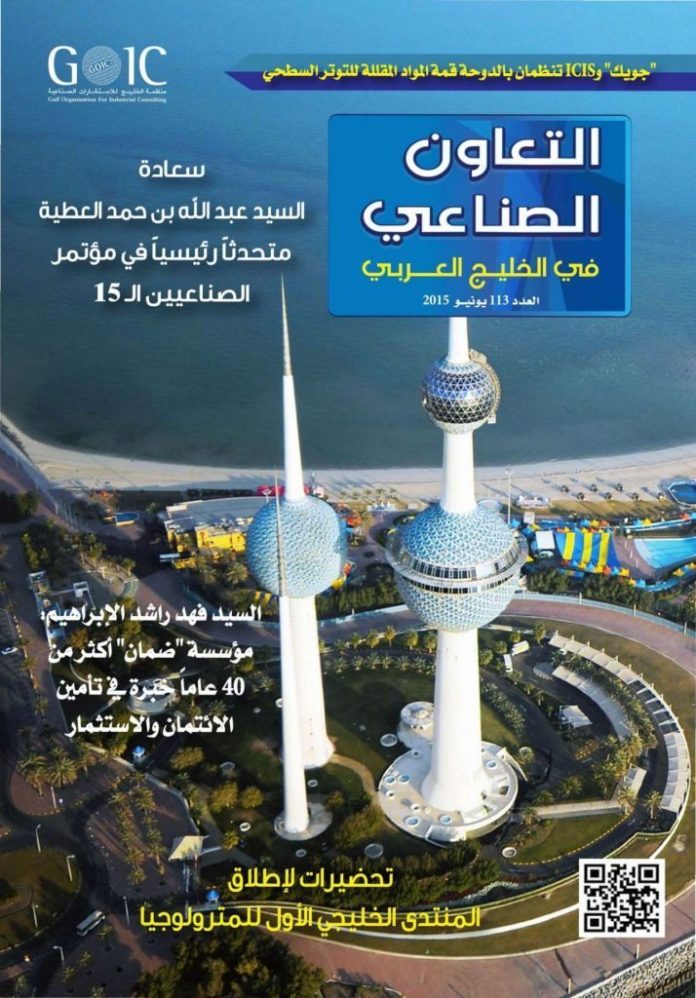 The Gulf Organization for Industrial Consulting (GOIC) has published the 113th issue of the “Industrial Cooperation in the Arabian Gulf” Magazine in which GOIC Secretary General Mr. Abdulaziz Bin Hamad Al-Ageel wrote “GOIC Promotes the Gulf Industrial Sector”. In his note, Mr. Al-Ageel highlights the Organisation’s efforts to carry out many activities and events that have a major impact on the industrial sector. GOIC seeks to support the GCC industrial sector and achieve economic development in the Gulf. Regarding the same, the 15th Industrialists’ Conference “Direct Foreign Investments: their Impact on Gulf Industries” will be held in November 2015 under the patronage of His Highness Sheikh Sabah Al-Ahmad Al-Jaber Al-Sabah, Emir of Kuwait and with the participation of GCC ministers of industry.

The new issue features a dossier on the 15th Industrialists’ Conference, its themes and sessions, in addition to an industrial report about GCC manufacturing industries. The new issue also includes an interview with His Excellency Mr. Fahad Rashid Al-Ibrahim, Director General of the Arab Investment and Export Credit Guarantee Corporation (Dhaman), who gives an overview of more than 40 years of this Corporation’s history. Mr. Al-Ibrahim also explains the Corporation’s activities and objectives in detail.

Editor-in-Chief Mrs. Abir Adel Jaber wrote “GOIC… A Strong Network of Global Industrial Relations”,  in which she highlights GOIC’s endeavours to sign several agreements and memorandums of understanding aiming at facilitating cooperation and coordination in the industrial field, particularly in the area of consulting and exchange of expertise.

This issue also includes several articles such as “Gulf Sovereign Wealth Funds… Savings and Investments” by Mr. Saeed Khalil Al-Absi, “GCC Energy Efficiency” by Dr. Nozad Al-Hiti and an article written in English by Engineer Ismael El-Shafei about soap and detergent industries in the Gulf.

Not to be missed is a report on “Invest in Qatar 2015” Forum co-organised by GOIC, Qatar’s Ministry of Energy and Industry and Manateq at the St. Regis Doha, Qatar on the 27th and 28th of April 2015.

Furthermore, this issue includes a summary of an industrial investment opportunity about a project to produce frozen potato fingers and the Magazine’s standard sections such as “GOIC News”, “Upcoming Industrial Events”, “Industrial Sector News” and specialised training workshops offered by GOIC in 2015 under the Training and Capacity Development Program (TCD) to develop the capacities of workers in the industrial sector in GCC countries and Yemen, in addition to other topics.

A full version of the magazine is available on www.goic.org.qa.