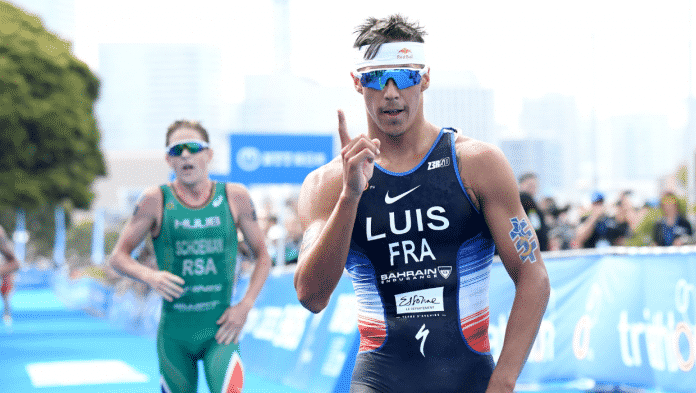 Bahrain Endurance athletes saw action this weekend in Cagliari and Yokohama with Alistair Brownlee racing and winning his first sprint triathlon in five years, Vincent Luis solidifying his lead in the triathlon series championship, and Lauren Parker bouncing back from surgery to take the podium.

Brownlee put on a powerful surge against Justus Nieschlag over the final 300 meters of the run to win the Cagliari World Cup after being in the mix on the swim and dictating pace on the bike. After having focused on longer races last year, the two-time Olympic gold medalist for Great Britain was happy with his efforts. “I thought I’d struggle a bit on the run today. I knew I didn’t have that top-end form, but was trying to run at my own pace and make it hard. I just said to myself with a couple of minutes to go no one can push harder than me. If they are going to beat me they’re going to have to go incredibly deep.”

He continued, “To be honest I didn’t think I was going to win but I just told myself, ‘come on just commit, commit, commit’ and I did.

“I’m delighted to be back racing and actually at the sharp end of the race. I’m still sitting on the fence, I have European Champs in two weeks and Leeds the week after that. I’m hoping to have a bit of a progression curve in the lead up to those and see where that leaves me in three weeks’ time. Then I’ll have to start answering the question then.” That question being, will Brownlee go for an unprecedented third Olympic gold?

In Yokohama, Vincent Luis continued his quest to capture the top ranking in the World Triathlon Series, winning the Olympic distance race in a sprint against Henri Schoeman. The Frenchman was among the race leaders from the start pushing the pace in the swim, then forming a lead group of ten on the bike including Bahrain Endurance teammate Javier Gomez. On the run, Luis led a breakaway group with Schoeman, Gomez, and Bence Biczak and dictated the pace through to the finish line.

Luis said, “I didn’t feel really great at the start and I was not expecting to have a great race, but I just wanted to keep my lead so I worked hard in the breakaway and I tried to lead as long as I can in the run which I did not do in Bermuda and cost me a bit.

“After the second lap I start to push at the front and trying to make the others suffer a little bit, and I think that was a good idea because every time they tried to attack I could respond, and that was my tactic to just let them behind me suffer until the last 300 meters.”

Despite feeling fatigued, Gomez stayed with the lead group throughout and only missed the podium by 12 seconds as Biczak pipped him for bronze. The Spaniard said, “The guys pushed the pace a bit harder and I just can’t keep up so that’s all I had today.

“I did Bermuda three weeks ago, and a week after that the Long Distance World Championships in my hometown, Pontevedra which was quite a long race and then travelling here for this race… Not my best race but it’s been pretty consistent.”

Also in Yokohama for the World Paratriathlon Series race, Lauren Parker of Australia clinched the bronze medal just 54 seconds behind Commonwealth Games champion Jade Hall. It was also a new best time on the course for Parker, finishing five minutes faster in 1:09:55 despite undergoing spinal surgery only eight weeks ago. She now rises two spots in the ITU Paratriathlon rankings to #3.

Gulf Air, the national carrier of the Kingdom of Bahrain, has appointed Mr. Abdulrauf Meer Abdulrahim as Senior Manager Cabin Crew to manage one...
Read more