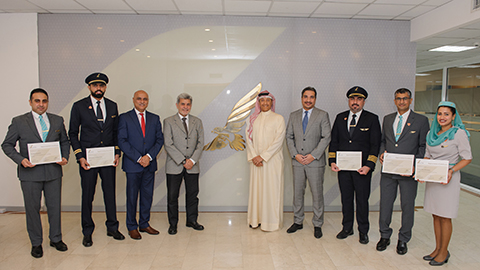 Gulf Air Honours its Distinguished Crew of the Month

Gulf Air – the national carrier of the Kingdom of Bahrain – recently honoured a number of its distinguished crew of the month who exhibited exceptional performance in serving the airline’s passengers; as they were honoured by Gulf Air Acting Chief Executive Officer Captain Waleed AlAlawi in the presence of a number of the airline’s executive management members.

Congratulating the honoured crew, Captain AlAlawi stated “I am delighted to shed light on this distinguished calibre of our crew who applied the utmost standards of quality in their performance. We are proud to have this kind of high quality calibre that represents the Kingdom of Bahrain and its national carrier as our best ambassadors to the international aviation industry; and I am certain they will play an integral role in taking the airline forward during its journey of success”.

The national carrier continues investing in the training and development of its human resources, as it believes in the importance of its manpower to achieve the goals of its strategy, of which becoming the carrier of choice in the region is of the airline’s most important goals.