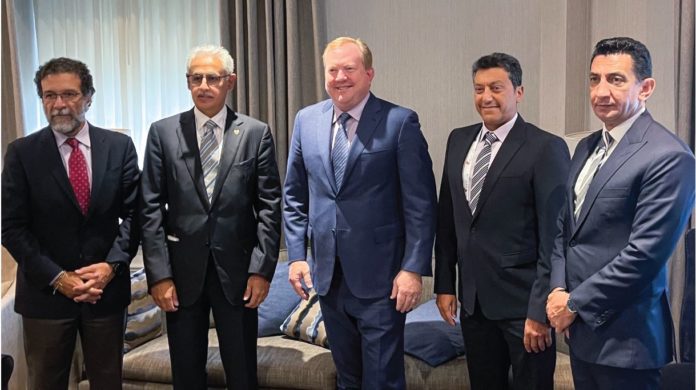 Gulf Air, the national carrier of the Kingdom of Bahrain, met with senior officials from Boeing during the 77th IATA Annual General Meeting which was held in Boston, Massachusetts in the United States of America recently. The event was organised by the International Air Transport Association (IATA) on an annual basis and it sees member airlines from all over the world attending and networking under one roof.

The meeting took place between HE Mr Zayed R. Alzayani, Minister of Industry, Commerce and Tourism and Chairman to the Board of Directors at Gulf Air and Mr. Stanley A. Deal, President and CEO of Boeing Commercial Airplanes where the two parties discussed the challenges that the industry had overcome during COVID-19 and the possibilities of new opportunities between both parties.

“The national carrier of the Kingdom of Bahrain proudly refers to the Boeing 787-9 Dreamliner as its flagship aircraft.” stated HE Mr Zayed R. Alzayani after the meeting “The new fleet strategy that Gulf Air is currently executing has proved highly successful for our network and passenger experience with the Boeing 787-9 Dreamliner serving our most important routes along with being a major contributor to our cargo operations.”