Social media are applications, services, and systems...
SocietyPR This WeekGulf Air Operated its First Ever Transcontinental Lower Emission Flight from Finland to Bahrain 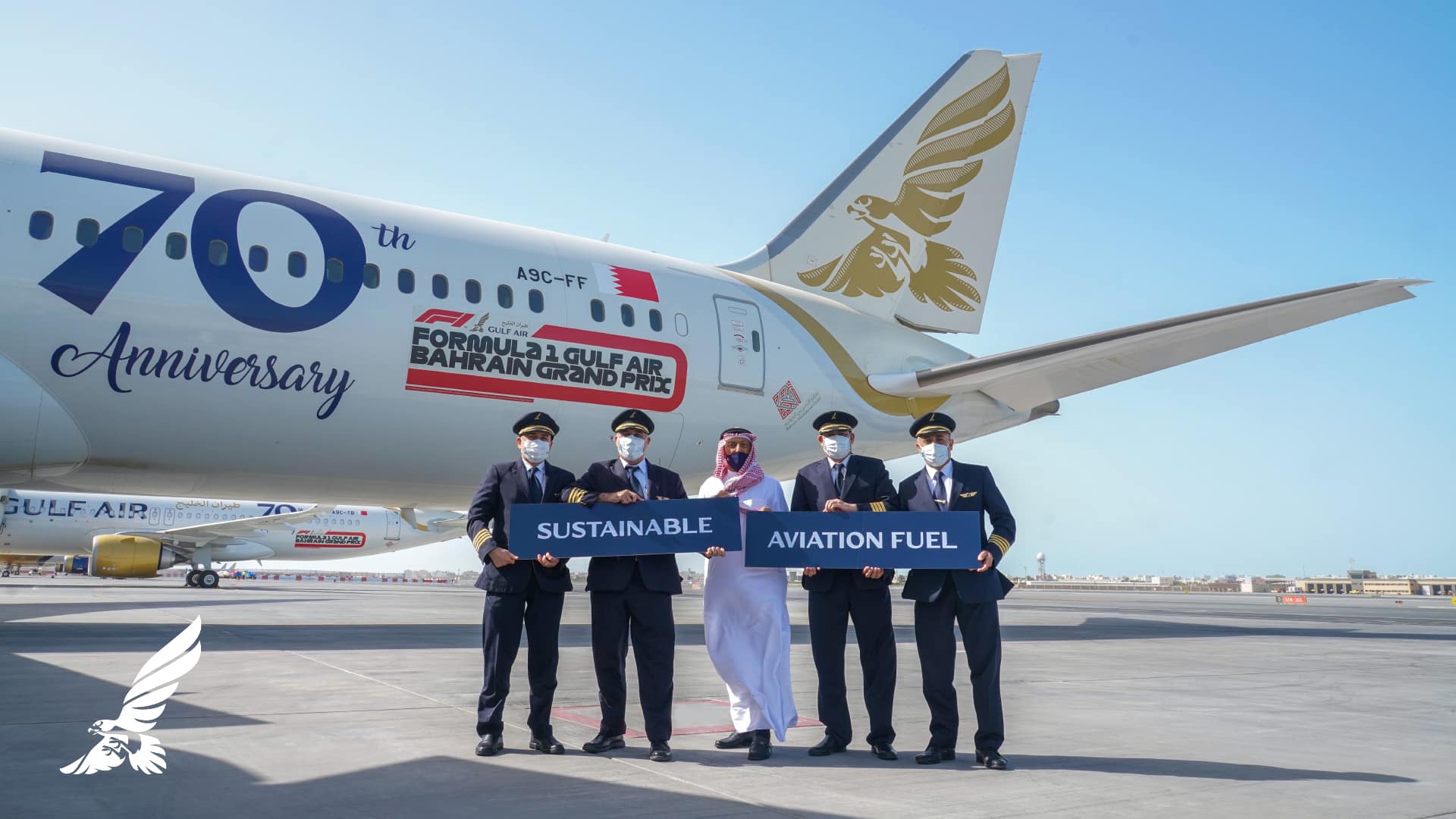 Gulf Air, the national carrier of the Kingdom of Bahrain, recently operated its first ever transcontinental lower emission flight which took off from Helsinki in Finland to Bahrain International Airport. Operated by the airline’s flagship Boeing 787-9 Dreamliner, the lower emission flight used operated Sustainable Aviation Fuel provided by Neste to perform the airline’s iconic flypast at the 2021 Formula 1 Gulf Air Bahrain Grand Prix last month. The Civil Aviation Affairs at the Ministry of Transportation and Telecommunications (MTT) and Bahrain Petroleum Company (Bapco) supported this historic flight and provided consultation to Gulf Air to successfully conduct the operation.

During the stop in Helsinki, Gulf Air underwent a random SAFA inspection which consisted of a safety check at the ramp of airports at European Union member states and successfully completed with no findings.

Gulf Air’s fleet of Boeing 787-9 Dreamliner is scheduled on its long-haul routes and are equipped with Rolls-Royce Trent 1000 engines which boast superior fuel efficiency and reduced emissions, consuming 20% less fuel and producing around 20% fewer emissions than the aircraft they replaced in Gulf Air’s previous fleet. Neste MY Sustainable Aviation Fuel™ provides an immediate solution for reducing the carbon emissions of flying. In neat form and over the life cycle, its use results in up to 80%*lower greenhouse gas emissions compared to fossil jet fuel*.

Commenting on behalf of Gulf Air, Captain Waleed AlAlawi, Acting Chief Executive Officer, said: “This is a major milestone for Gulf Air and an important chapter of our history. This lower emission flight marks the beginning of our journey into our future strategy to explore the use of Sustainable Aviation Fuel in our aircraft and standing by our commitment to lower our carbon emissions.” He added: “We worked closely with Neste, as well as the Civil Aviation Affairs and Bapco in consultation capacity, to operate this special flight from Helsinki to Bahrain. We are exploring potentials and possibilities of the use of sustainable aviation fuel for a better tomorrow for the generations to come and for our planet”

Commending Gulf Air’s initiative and success in operating its first international lower emission flight, His Excellency the Undersecretary for Civil Aviation Affairs Mr. Mohamed Thamir AlKaabi stated “As the regulator of the aviation industry, and as Member State of the International Civil Aviation Organization – which is working on a Civil Action Plan to reduce CO2 emissions from international aviation – we are committed to adopting measures and setting policies to encourage the use of sustainable aviation fuel. We are pleased to see Gulf Air embarking on this journey and for contributing to the industry’s efforts in improving fuel efficiency and reducing emissions.”

“We, in Bapco, continue to maintain our promise to stay ahead of our customers’ energy needs. The use of Sustainable Aviation Fuel by Gulf Air and the aviation industry will provide a solution for reducing the carbon emissions of flying and can lower greenhouse gas emissions by up to 80% compared to fossil jet fuel”, said Khalid Buhazza, General Manager Marketing in Bapco.