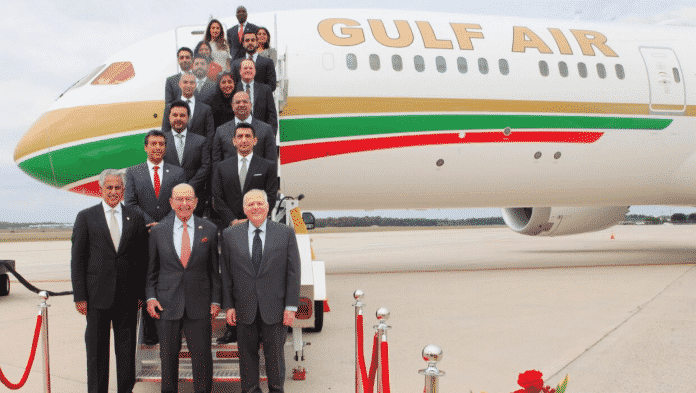 On the sidelines of His Royal Highness Prince Salman bin Hamad Al Khalifa, Crown Prince, Deputy Supreme Commander and First Deputy Prime Minister’s official visit to the United States of America, Gulf Air, the national carrier of the Kingdom of Bahrain, received its seventh Boeing 787-9 Dreamliner at Dulles International Airport in Washington DC. The event, which took place ahead of Gulf Air’s 70th anniversary, was attended by the Minister of Industry, Commerce and Tourism, and Chairman of Gulf Air’s Board of Directors, HE Zayed R. Alzayani, and the United States Secretary of Commerce, Mr. Wilbur L. Ross. 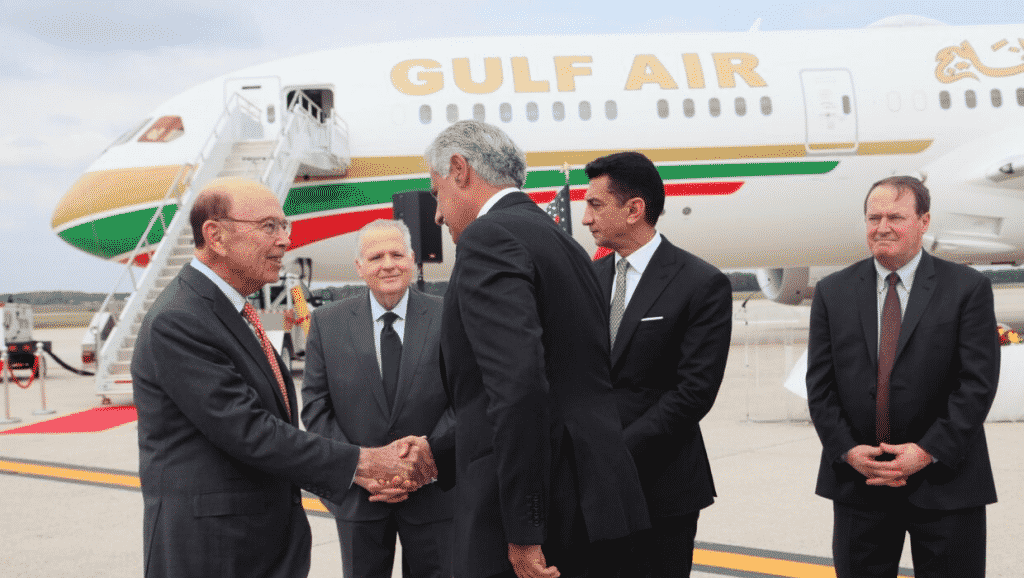 Attendees toured the aircraft, which displayed a redesigned vintage version of the Golden Falcon Lockheed TriStar livery, representing the company’s iconic design from the 1970s.

Commenting at the event, H.E. Alzayani said: ‘It gives me great honour to reveal this special livery which would definitely resonate nostalgically with our global audience. The revival of this livery is a homage to our resilient national carrier as it celebrates being one of the first established carriers in the Middle East and how it continues to connect the Kingdom of Bahrain to the world’.

The new Dreamliner will join the fleet by the end of October, increasing the total number of Dreamliners operated by the airline to seven aircraft following the delivery of three more by 2021.

In 2018, Gulf Air launched its new brand identity at the Formula 1 Gulf Air Bahrain Grand Prix and introduced its first Boeing 787-9 Dreamliner along with a series of new destinations. The airline also launched a new boutique strategy in early 2019. As Gulf Air moves forward with its strategy, the airline pays tribute to the past with a revamped livery signaling a new era.

Gulf Air will celebrate its 70th anniversary in 2020 with a series of events and promotions.

The police started deploying security patrols on public roads and taking legal action for any violation of the precautionary measures by the Interior Ministry...
Read more
Inside Bahrain

His Majesty King Hamad bin Isa Al Khalifa was at the forefront of those who welcomed His Royal Highness Prime Minister Prince Khalifa bin...
Read more
Inside Bahrain

The Ministry of Labour and Social Development (MLSD) has launched online services and set up a hotline for queries. The minister, Jameel bin Mohammed Ali...
Read more
Inside Bahrain

Batelco is pleased to announce the introduction of same-day Home Delivery service starting from Thursday 26-March, to support the community during the current period...
PR This Week

Huawei offers users an extended warranty on a range of products. This as a precautionary measure based on recent public health and prevention considerations....
Tech

Fitbit’s upcoming Charge 4 fitness tracker broke cover earlier in March. Revealing a design that was virtually identical to the 2018 Charge 3 model....
Inside Bahrain

Out of the six ‘rasas’ or tastes as defined in Ayurveda, the Indian science of healing, ‘Katu,’ rasa is pungent taste or very spicy...
Sports This Week

In line with the Ministry of Health guidance, and as part of the preventive measures against the widespread of the COVID 19 virus, stc...
iGA

The Kingdom of Bahrain is trying to overcome the circumstances caused by the novel coronavirus (COVID-19) under the eminent leadership of His Majesty King...
© GO ALIVE MEDIA
MORE STORIES