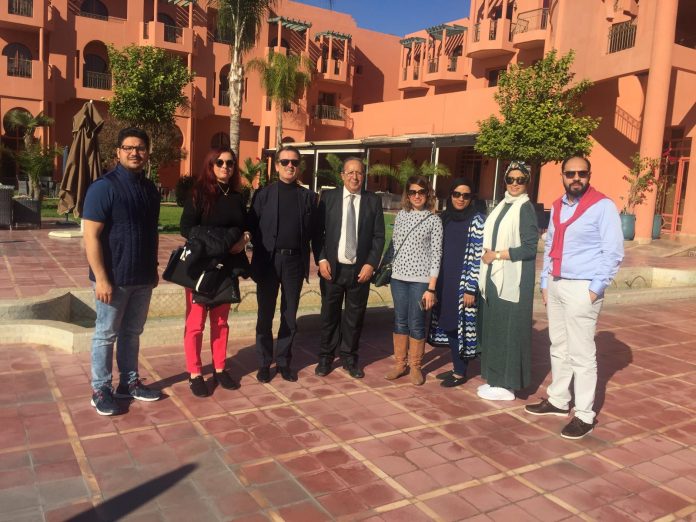 Gulf Air Showcases B787 Dreamliner and Casablanca to Bahrain Media

Gulf Air, the national carrier of the Kingdom of Bahrain, recently arranged a press trip for Bahraini press to experience its Boeing 787-9 Dreamliner aircraft on a flight to one of its newest destinations, Casablanca, Morocco.

The journalists had the opportunity to experience the comfort of flying Gulf Air’s new Dreamliner and the facilities of its Falcon Gold lounge in Bahrain International Airport prior to the flight. In Casablanca, a city that has been added to the Gulf Air’s network since summer 2018, the guests visited notable touristic sights and landmarks and enjoyed staying in a key 5-star hotel, Sheraton Casablanca Hotel.

Gulf Air operates five weekly direct flights between Bahrain and Casablanca on its B787-9 Dreamliner. The aircraft offers 282 seats in a two-class configuration, with 26 Falcon Gold Class seats and 256 Economy Class seats – a 32% increase in capacity on the airline’s previous wide body offering. The industry-leading technology of the Boeing 787-9 Dreamliner boasts superior fuel efficiency, environmentally friendly operations and range flexibility that will facilitate Gulf Air’s planned network expansion and fleet optimisation at a lower operating cost. The state of the art aircraft includes many improvements such as the largest windows of any jet, air that is cleaner and more humid for greater comfort, large overhead bins with room for everyone’s bag, soothing LED lighting and technology that senses and counters turbulence for a smoother ride.

The American University of Bahrain (AUBH), has announced its strategy for the campus re-opening, in compliance with the guidelines issued by the Ministry of...
Read more
PR This Week

As part of its efforts to support young people in the Kingdom, AlMabarrah AlKhalifia Foundation announced the signing of a Memorandum of Understanding (MoU)...
Read more
PR This Week

The annual Bahrain Summer Festival is back for its 12th edition and is unlike ever before! Bringing us Together Virtually, this year’s highly-anticipated festival proves...
Read more
PR This Week

As part of Accor Premium brands, Mövenpick Hotel Bahrain has received Accor #AllSafe label and was audited and also certified by Bureau Veritas on the 19th...
PR This Week

Your next Samsung Galaxy or iPhone may soon include the toughest gadget glass Corning has ever created. The company’s announcing Gorilla Glass Victus —...
Sports This Week

A blind student who created a special YouTube channel to teach students with special needs about the use of smart applications has been honored...
Spotlight

One day I read a news item which made me feel annoyed and a bit worried. It was reported that in Mumbai, youngsters from...
Wheels and Gears

Land Rover in the Kingdom, has been awarded the enhanced status of an official Special Vehicles Operations (SVO) dealer. Bringing to Bahrain the first-of-its-kind...
Sports This Week

HH Shaikh Nasser bin Hamad Al Khalifa, Representative of His Majesty the King for Humanitarian Work and Youth Affairs expressed his delight after his own...
© GO ALIVE MEDIA
MORE STORIES