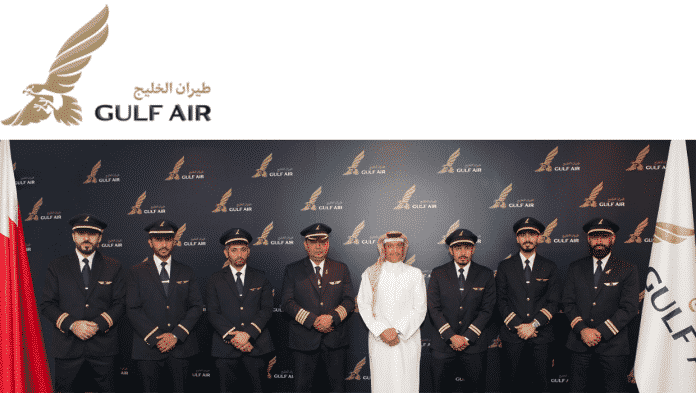 Gulf Air’s Deputy Chief Executive Officer Captain Waleed Al Alawi congratulated the airline’s new pilots for passing the selection process, and noted: “With more than 70% of our pilots being Bahrainis, this is a major milestone for us to be a leader amongst carriers from our neighbouring countries by having local, specialized and professional talents representing our glorious Kingdom in the skies. Gulf Air continues to takes pride in being a corporate leader in Bahrainization in the Kingdom of Bahrain.”

The Airline news pilots are: Captain Aref Al Mulla, first officers: Ali Hussain, Khalifa Daleem, Khaled Al-Setrawi and Husain Ismail, second officers: Khaled Bubshait and Ali Al Noaimi. “I am very happy to join Gulf Air and be one of its ambassadors in the skies. I have worked in regional airlines in neighbouring countries, but nothing compares returning home and working with my country’s national carrier. Being close to my family and friends is amazing,” commented Captain Aref Al Mulla. Also commenting first officer Khalid Al Satrawi said, “It feels great to be amongst this group of Bahraini pilots joining Gulf Air together on the same time. We thank the airline and its management for giving us this opportunity to return home and be the future captains of Gulf Air”.

Gulf Air prides itself with its legacy and long experience in aviation; as the airline selects only the top pilot contenders based on their performance; and in compliance with the high standards that Gulf Air has set for its pilots and with the Bahrain Civil Aviation Affairs safety regulations. Safety and security issues are important elements for the national carrier in selecting its pilots, as they undergo a very challenging screening process includes a technical assessment, followed by a comprehensive technical interview.

Gulf Air is committed to invest in its Bahraini workforce and their career development and as such, it continues to provide opportunities for Bahraini nationals to take over senior positions in the company with 90% of employees that are based at the headquarters in Muharraq being Bahraini along with nearly 70% of its pilots. The airline has established a tailored programme in which it recruits and trains Bahrainis to become aviation professionals and continue Bahrain’s legacy of being a longstanding reliable source of aviation industry professionals who have served the national carrier and other regional airlines.

Gulf Air, the national carrier of the Kingdom of Bahrain, commenced operations in 1950, becoming one of the first commercial airlines established in the Middle East. Today, Gulf Air is a major international carrier serving 49 cities in 27 countries.

The airline operates double daily flights or more to 10 regional cities, in addition to select destinations in the Indian Subcontinent and Europe, from its hub at Bahrain International Airport. Gulf Air currently serves all its destinations with a combination of wide and narrow body fleet of 37 aircraft. The airline received 5 Boeing 787-9 Dreamliner’s and 1 Airbus A320neo aircraft in 2018. In 2019 the airline will further receive 2 Dreamliner’s and 4 A320neos in 2019. The modern fleet will herald a new era for Gulf Air as it continues to enhance its product and service offering. Renowned for its traditional Arabian hospitality, evidenced by the airline’s signature family and business friendly products, Gulf Air is committed to being an industry leader and developing products and services that reflect the evolving needs and aspirations of its passengers.

Gulf Air connects Bahrain to the world and, as such, is a key national infrastructure asset, serving as a powerful driver for the economy and supporting the Kingdom’s on-going economic growth. With its mobile app and Bahrain stopover programme, the airline promotes Bahrain as a tourist destination to the world.